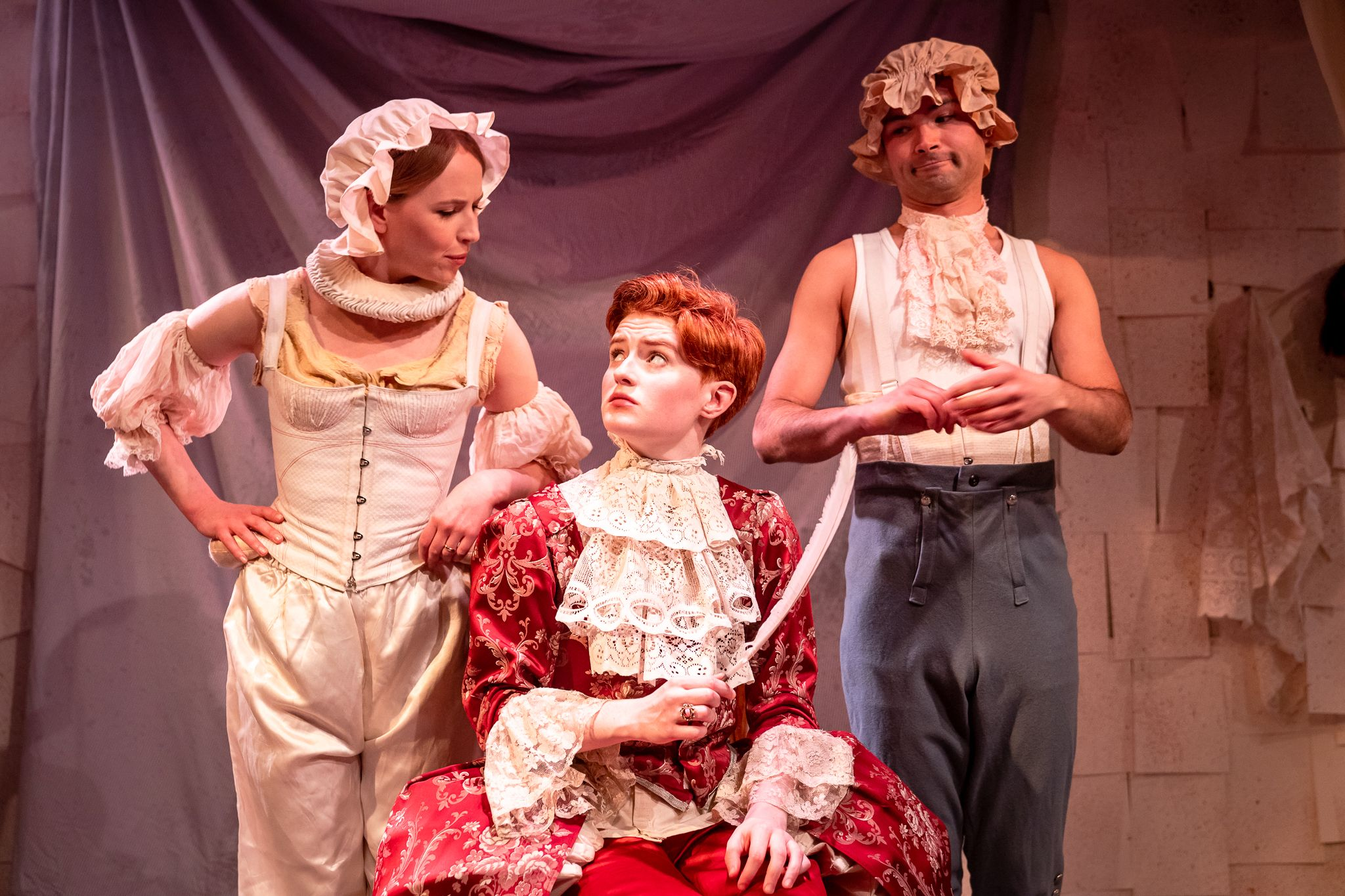 Sarah Ruhl’s adaptation of Virginia Woolf’s Orlando is joyfully brought to life under the creative direction of Stella Powell-Jones at the Jermyn Street Theatre. Woolf’s lyricism is preserved through the sprightly dialogue of the chorus, whilst Taylor McClaine’s Orlando is gallant and charming. The chorus deftly switches roles and infuses life into small props cleverly hidden in costumes or hung on the stage wall. The actors moved with synchronicity and speed, making for a spell-bound audience.

The play began as does Woolf’s original text: with a sixteen-year-old Orlando in a noble duel with an imaginary foe. The first half of the show chronicles Orlando’s ascent to court under the adoration of the Queen; his unrealized poetic ambitions; his love for, and betrayal by Sasha. Tigger Blaize is a gloriously crusty Elizabeth I, whilst Skye Hallam’s Sasha is pantomimically conniving. Rushed off to Constantinople to escape the affections of a Romanian nobleman, Orlando wakes up one day transformed into a woman; just as we are to see the lady herself, as of yet concealed in shadow by a sheet-turned-curtain, the lights dim for the interval. Orlando’s sex change is the central conceit of Woolf’s novel; the timing of the interval neatly captures the immensity of Orlando’s transformation. When the second half of the play begins, our protagonist’s metamorphosis is complete, and the cast’s assumption of female pronouns as they guide Orlando’s story is seamless.

The second half lagged a little where the first brilliantly kept its momentum. Here, the plot skipped over various parts of Woolf’s novel: this Orlando returns quite simply to British high society, without her further adventures chronicled in the original. Orlando’s marriage to Stanton Wright’s deliciously effeminate Marmaduke also feels somewhat rushed in comparison with the attention lavished upon the earlier affair with Sasha. McClaine’s Lady Orlando doesn’t quite conjure the same affection as does the boyish charm of Orlando the nobleman. It would have added to the play if McClaine had done more with the female Orlando; as it was, she stood a little insipid in comparison to her former brilliance.

Although Orlando is the hero(ine) of the play, the chorus deserves huge credit. Rosalind Lailey, Stanton Wright and Tigger Blaize jumped between characters and speakers with infectious energy. Their performances were much more varied than McClaine’s, which speaks mostly to the difference between the chorus and protagonist. However, at times it was obvious that McClaine is a less experienced actor; indeed, the play marks their professional debut. That said, McClaine brought a youthfulness and charm to Orlando quite true to Woolf’s original. The casting of a young, non-binary actor at the beginning of their career very much fits the role: no doubt, Taylor McClaine is destined for great things.

The beauty of this production lies for me, in the vivacity of the actors’ performances, aided by dialogue that was lyrical without being pretentious, comedic, if at times overly camp. The Jermyn Street Theatre made for an intimate viewing experience, although I found that the actors might have enjoyed a bigger stage. Ruhl’s adaptation foregoes some of the more serious tenors of Woolf’s novel, prizing the theatrical over the reflective; but under the guidance of Powell-Jones, tonight’s performance of Orlando made for a mesmerising watch.

Orlando is on at the Jermyn Street Theatre in Soho from 28 April – 28 May 2022. Ticket info here: www.jermynstreettheatre.co.uk

Sophia Sheera is a writer interested in migration, cultural citizenship, displacement and queerness with a focus on Central Asia and Northern India. Sophia is inspired by talking to the people whose stories are sidetracked by sensationalist headlines, and as such aspire to share those counter-narratives through political journalism.