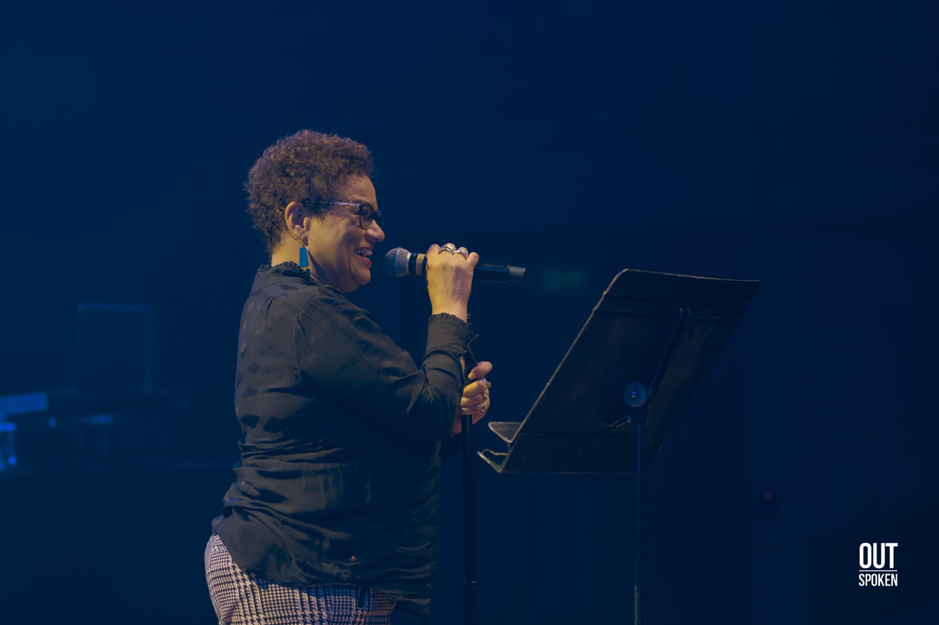 Out-Spoken returned back to the Southbank Centre last week, showcasing a range of talented poets and new musical artists. Poetry is an art form that is often made to feel prolific – second-hand almost. Out-spoken has done a brilliant job at creating a space that embraces this form of artistry, forming a space and community where language can be celebrated and enjoyed.

The night included sets of both poetry and music, from Max Porter, Jackie Kay and Simon Armitage; and music from bshp and Kay Young. This evening, the theme of much of the poetry was largely centred around rebellion, protest and defying the system. In a time when the world is going through various crises, it is important to be able to share these ideas, emotions and stories.

Starting with Max Porter – who recited so passionately – and brought natural energy to the room, touching on themes of capitalism and ignorance in society. Porter emphasised the dangers of work culture in Britain, where work is seen as ‘just work’ and separated from the impacts it can have on others’ lives. This was in relation to work in the Arms industry, dealing with refugees and migration, and so on – jobs that deal with the livelihoods of others. The words ‘Safety and Affluence’ were repeated throughout his performance – two words we take for granted living in this country: sometimes at the cost of others’ safety.

This performance was followed by Scottish poet, Jackie Kay (pictured). I thoroughly enjoyed listening to Kay’s poems, as well as the humour and personal stories she added in between. Her poems were centred around protest and rebellion, in the face of racial, gender and LGBT discrimination in the past and present. As a woman of colour, I found that these poems resonated with me personally, and others in the audience. Kay referenced significant moments such as the 1980s Women’s marches to ‘Reclaim the night’, Nelson Mandela protests and the recent BLM protests – all of which sparked a feeling of solidarity in the audience.

Finally, Poet Laureate, Simon Armitage, was welcomed to the stage. He read a selection of poems and music lyrics, all of which were enjoyed by the audience. I particularly liked his poem ‘Let’s Bird Table’ which used various terms used in the corporate world to ridicule working culture.

The musical acts from bshp and Kay Young created a lively atmosphere throughout the evening. Bshp had a spectacularly strong voice, which transcended across the audience. Kay Young, an upcoming jazz and soul artist, recently signed to Jay Z’s management company ‘Roc Nation’ ended the evening on a high note. Kay Young captured the audience as we all danced to the end!

Out-Spoken is an outstanding organisation that creates a space for those who appreciate the artistry of language in all its forms. I thoroughly enjoyed this event and urge you all to join in for the next one!

Out-Spoken will be back at the Southbank Centre on 30 June 2022, book your tickets now at: https://www.southbankcentre.co.uk/whats-on/literature-poetry/out-spoken-june?eventId=901400

Reviewed by Ridha Sheikh – Ridha is a volunteer writer for Abundant Art. She is a recent History and Politics graduate from Queen Mary – University of London. Ridha is excited to explore and share her strong passion for London’s art scene.