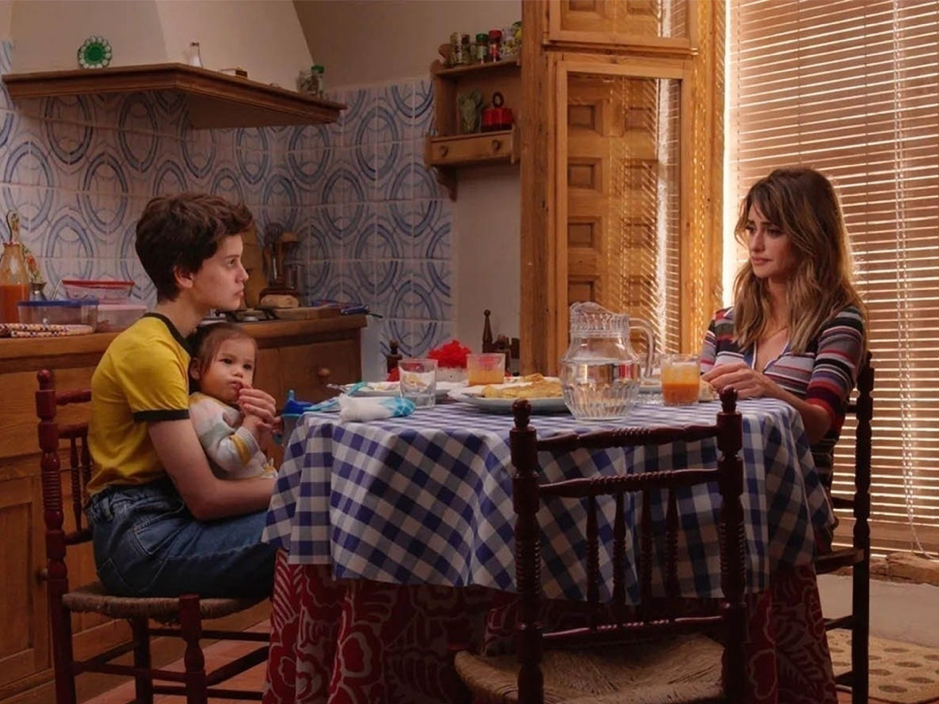 Only two years after the acclaimed long-feature “Pain and Glory”, Almodóvar comes back with “Parallel mothers”, a melodrama full of warmth and imprinted in the filmmaker’s signature style. The film is being welcomed with enthusiasm from both critics and audience, as it screened at the festival of Venice and received two Oscar nominations. It is currently screening at the ICA, a lovely central venue with a small old-style cinema that offers an intimate and immersive cinematic experience.

Forty-year-old Janice (Penelope Cruz) gets pregnant after a love affair with the married archaeologist Arturo (Israel Elejalde). An accidental but desired pregnancy that gets her excited about her upcoming life as a single mum, as her mother, grandmother and great-grandmother were before her. At the maternity clinic, she bonds with the terrified Ana (Milena Smit), a 17-year-old who regrets her pregnancy and resents her absent mother, Teresa (Aitana Sánchez-Gijón). Little do they know that their lives will soon be tragically intertwined in a dramatic development of death, love, sex, family and secrets. Despite sounding like the plot of a particularly cheesy soap opera, the film is actually full of realism and credibility. The story is character-driven and focuses mostly on the emotions and psychology of the characters, which overshadow even the multiple dramatic plot twists. It focuses on the vulnerability of the characters by showing them through face closeups, in the intimacy of their houses and often engaged in everyday domestic activities. Everyone is extremely fleshed out and given complex background stories and motivations, and you will find yourself sympathising even with Janice’s lies, Arturo’s cheating and Teresa’s rigidity.

The personal story of Janice and Ana runs parallel to Janice’s and Arturo’s adventure to find the corpses of ten men that were killed during the Spanish civil war and never returned to their families, one of whom was Janice’s grandfather. This ties to the central themes of the movie about the importance of the past and how the truth always prevails, both in the cases of historical truth and family secrets. However, the real heart of the story is family: Janice wants justice for her family, Ana is fleeing her dysfunctional parents and everything centres around the two women’s maternity. The solution of everything seems to lay in the importance of new-found families, as the story ends with the main characters deciding to fund a united and picturesque new group.

Cruz gives an extremely heart-felt performance and manages to portray a woman who is strong yet sensitive, maternal yet conflicted, resulting in a very multi-faceted character and a compelling protagonist. This marks her eighth film with Almodóvar, proving once again that their duo works to perfection and won her a 2022 Oscar nomination for best actress. Milena Smit portrays a very believable teenager full of angst and vulnerability with a crippling fear of abandonment, who desperately and passionately holds on to Janis like a lifesaver. Apart from Arturo, the cast is almost entirely feminine, as even the most minor characters in the background are usually female, be it a waitress, Janice’s nanny or Arturo’s archaeologist team members. The men of the film are consciously omitted from the story, being reduced to faceless voices on the phone or voiceless faces on pictures.

The colourful style, the beautiful house interiors and the creative editing are all that you would typically find in an Almodóvar movie. It is a perfect introduction to his universe for those who have never seen his films, and a great continuation for the others, even more vibrant and joyful than his previous works.

Get your tickets at ICA before the 3rd March at https://www.ica.art/films/parallel-mothers.