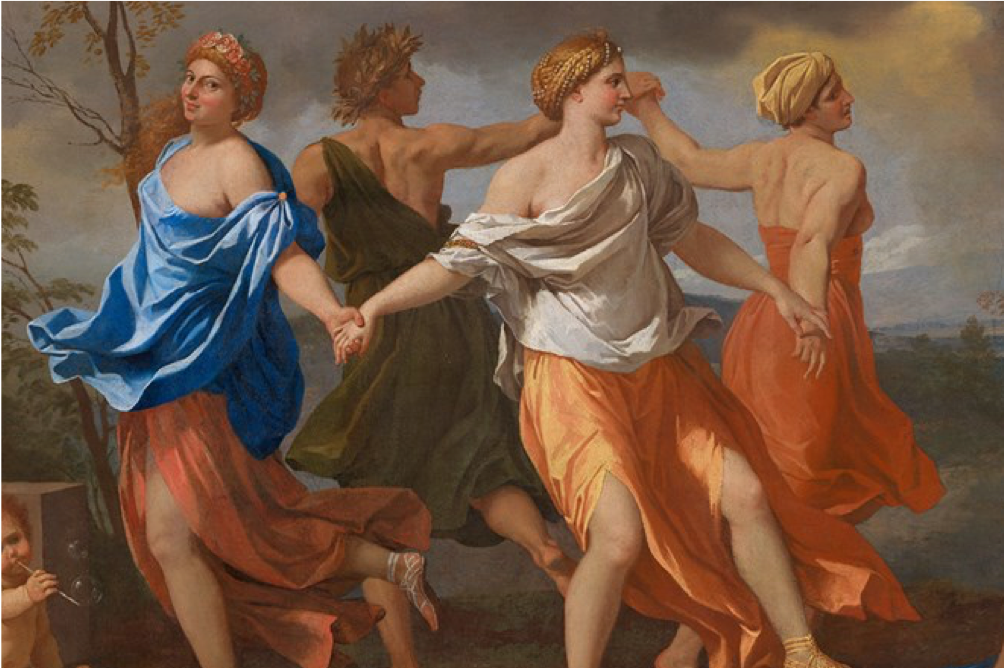 Painting movement in art has always been a conundrum for artists and art critics, as it requires instilling an illusion of movement to an art form that is, by nature, motionless. However, ‘France’s greatest painter’, Nicolas Poussin spent his early years perfecting his depictions of dance and movement in paintings through an intense study of Renaissance, ancient art, sketches and wax figurines. The exhibition is currently showing at the beautiful and historical National Gallery and I strongly recommend taking a detour to check out the permanent (and free!) exposition, whose iconic paintings one must see at least once in their life.

Poussin, a key artist of the Baroque movement, was born in Normandy in 1594 and studied in Paris. Despite his very French upbringing, he had always been fascinated by Rome, a city rich in Renaissance and ancient art, which he studied and analysed religiously to reproduce their vibrant colours and perfect proportions. He was mesmerised by ancient artifacts such as ‘The Borghese Vase’ and the beautiful ‘Dancers of Villa Borghese’, which you will find displayed all throughout the exposition. ‘He was a bit of a nerd for Ancient Rome, really’, affectionately jokes the curator of the event.

The exhibition casts a totally new light on the artist, whose Baroque religious and symbolically charged art has given him a certain reputation in art history for being cold and rigid. Although this statement is true for most of his work, these early paintings from his younger years unveil a new side of the painter of joyous and colourful decadence, intricate bodies, twisted movements, nudity and immoral abandon. Interestingly, these paintings were never considered scandalous, and some were even commissioned by the Cardinal of Richelieu. Poussin strategically depicted scenes charged with religious symbols, historical mythological references and Renaissance techniques, which gave his paintings an erudite and cultural aspect that hid the fact that the scenes represented are, in fact, orgies that are far from aligned with Catholic morality.

Another interesting aspect of Poussin’s artwork is his use of wax figurines to study movement, and although he is not the only artist to have used this technique, it is recognised that he used it more than any artist at that time. He moved with extreme fluidity from 3D figurines to 2D sketches, which explains the realism and the seeming elasticity of the bodies and movements in his paintings. The reconstructions of the figurines all throughout the exhibition and the multitude of chalk sketches will give you an interesting insight ‘behind the scenes’ of the paintings exposed.

The paintings are a delight to admire, as the movements of the bodies constitute a studied choreography that will guide your eyes through what is depicted on the canvas as they follow the movement. My personal favourite painting was, with no surprise, ‘A Dance to the music of time’, where Poussin depicts four figures dancing in a circle, representing the cyclicality of life and seasons. I cannot recommend the exposition enough to any lover of Poussin, Renaissance and mythology, or simply to anyone who appreciates beauty in art.

Get your tickets at https://www.nationalgallery.org.uk/exhibitions/poussin-and-the-dance