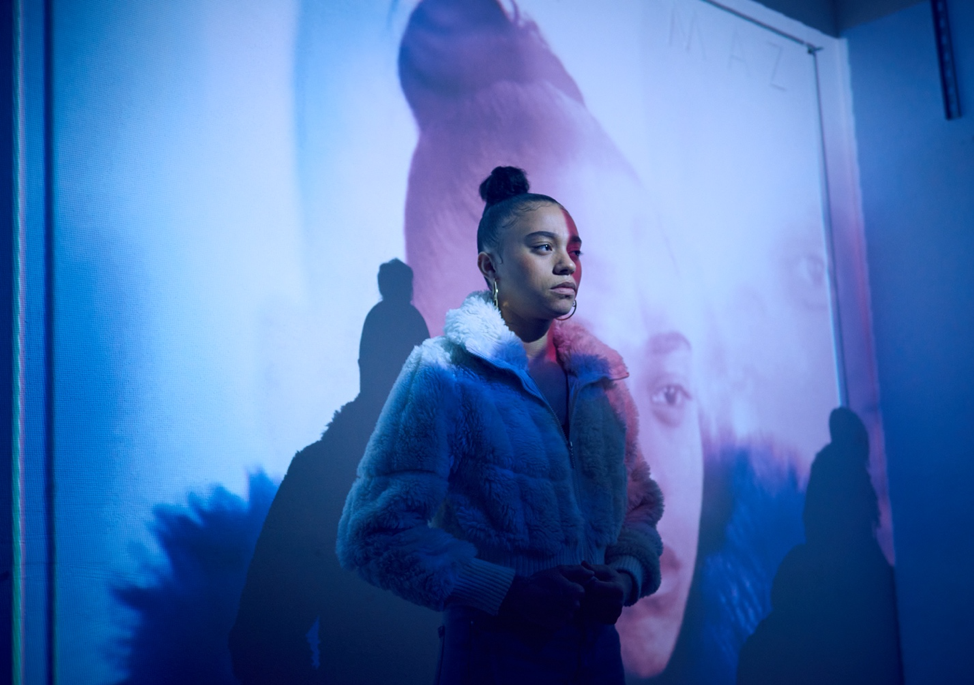 The Big House is without a doubt Islington’s hidden gem: the former frame factory hidden in a residential side street is currently hosting Redemption, a play directed by artistic director Maggie Norris about the everyday struggles of London’s abandoned youth. Music becomes their only way of expression, an aspect which is perfectly conveyed through the musical score composed by The Last Skeptik and written by James Meteyard. Norris paints a landscape of the harsh reality of these precarious lives who, at the brim of adulthood, are lost in a quest for a brighter path where redemption seems impossible.

We follow the story of Maz (Renaya Dennis), a young woman who uses her tough exterior and a constant mean frown to hide her deep vulnerability. As she flees her dangerous care home, she tries to find success as a singer in a recording studio where she meets Tayo (Shaquille Jack), a shy young man with an angelic singing voice. Together, the pair navigates a world of bitterness, violence and grief in a desperate search for identity and hope.

The Big House’s uniqueness as a theatre company is that it offers opportunities and mentoring to young people from difficult backgrounds. It gives them a space for artistic expression allowing talents to bloom. The portrayal of underprivileged environments isn’t always represented so accurately in the media, but “Redemption” offers a totally natural rendering of the slang, attitudes and relationships typical of rural areas. The more emotional moments are also very well expressed, as one can imagine that they hit familiar buttons for the actors. Ranaya Dennis is spectacular, and gives her character the perfect balance of likable vulnerability and bitter toughness, like a wounded stray animal that defends itself by growling at anyone who approaches it. The story entirely revolves around her character and her internal monologues, and yet her performance was flawless and strong enough to carry the whole play. A rather arduous task for such a young talent, but she manages to execute it perfectly. Similarly, Shaquille Jack gives a very touching performance despite the quiet nature of his character, and his singing moments are incredibly moving. The supporting cast is also extremely believable and genuine, offering very natural performances and flowing dialogue.

The immersive aspect of the play is also primarily due to the creative use of space: each scene is set in a different room of The Big House, and the public is invited to walk to the next room every time a scene ends. One discovers the recording studio, Maz’s friend’s house, the care home, Tayo’s favourite bridge, and many other places that all hold the same slightly abandoned and neglected look. The absence of a proper stage has the actors play a few centimetres away from the public, which gives an impression of being part of the conversations between the characters. Whilst classical theatre estranges the audience from the stage, Redemption plunges you into the action, thus stimulating and engaging thoughts on the social problems that are being represented.

In their brutally harsh world, music seems like the only window of hope for Maz and Tayo, an interesting analogy on the role of art in difficult times, which is particularly relevant today. The music of the play has range, going from rap to club music. Maz’s and Tayo’s duet on the bridge was hauntingly beautiful, and many audience members were still humming the tune whilst leaving the venue.

Overall, the play offers a raw and emotionally charged insight into the reality of London’s struggling youth. Maz’s struggle for survival and her attempt to find a purpose in a system that is constantly trying to crush her leaves us with a hanging question: is there any chance for redemption? Or is everything just part of an endless loop that is impossible to break?

Have a look at The Big House and Redemption at https://thebighouse.uk.com/#!/.