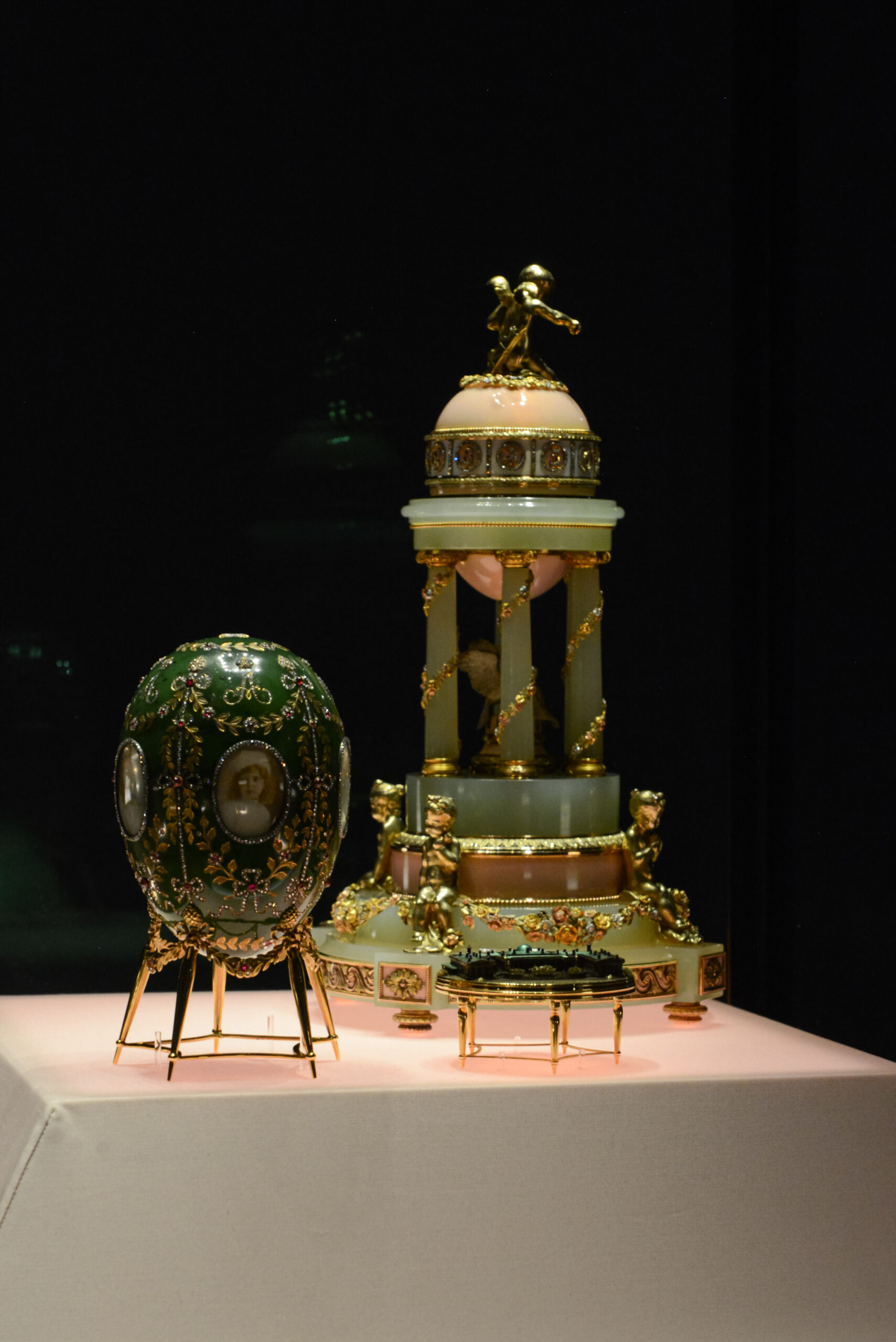 This dazzling exhibition at the V&A showcases the breathtakingly elegant work of the legendary Russian jeweler, Peter Carl Fabergé. Most famously known as the Romanovs’ personal goldsmith, this exhibition uses over 200 objects to delve deep into the work of Fabergé within and beyond Russia, admiring his excellent craftmanship. Fabergé in London celebrates the fact that London was the location of his only overseas branch and takes us on a journey through Carl Fabergé’s career. The exhibition is carefully planned out: as we move through the rooms, we uncover another layer of Fabergé’s work, before reaching the grand finale, which is the Imperial Easter Eggs.

The Romanovs were well-known for their extravagance; gift-giving played a significant role in their relationships. Fabergé’s intimate gifts perfectly represent an Empire marked by sex, jewels, and death. The first section of the exhibition explores the significance of Fabergé’s crafts in the Romanov family. From tiaras to trinket boxes, we begin to sense a flash of brilliance created by Fabergé’s work. We embark upon the intricate methods, such as enameling, and the precious materials used in Fabergé’s work.

The exhibition then moves on to Fabergé’s work outside of Russia. The London branch acted as a luxury retail destination for wealthy domestic and international clientele. Exchanging gifts was an important ritual in Edwardian society; Fabergé’s creations were desired by the elite as they were appreciated for their bespoke designs, rather than their value. Each item in this exhibition carries its own story, creating a real sense of intimacy and fascination.

The final room of the exhibition contains 15 Imperial Easter Eggs, many of which have never been seen in Britain – this is the largest collection of eggs to be exhibited in a generation. Each one so intricately designed and beautifully crafted, it is impossible to not be utterly stunned by the work of Fabergé. The Moscow Kremlin Egg is most definitely one which stood out to the eye.

Fabergé in London is a shining example of Russian craftsmanship and history. This exhibition is one that does not fail to amaze the eye, whilst telling a story of romance and revolution. I would highly recommend everyone to view this exhibition whilst they have the chance!

Get your tickets at: https://www.vam.ac.uk/exhibitions/faberge

Reviewed by Ridha Sheikh – Ridha is a volunteer writer for Abundant Art. She is a recent History and Politics graduate from Queen Mary – University of London. Ridha is excited to explore and share her strong passion for London’s art scene.