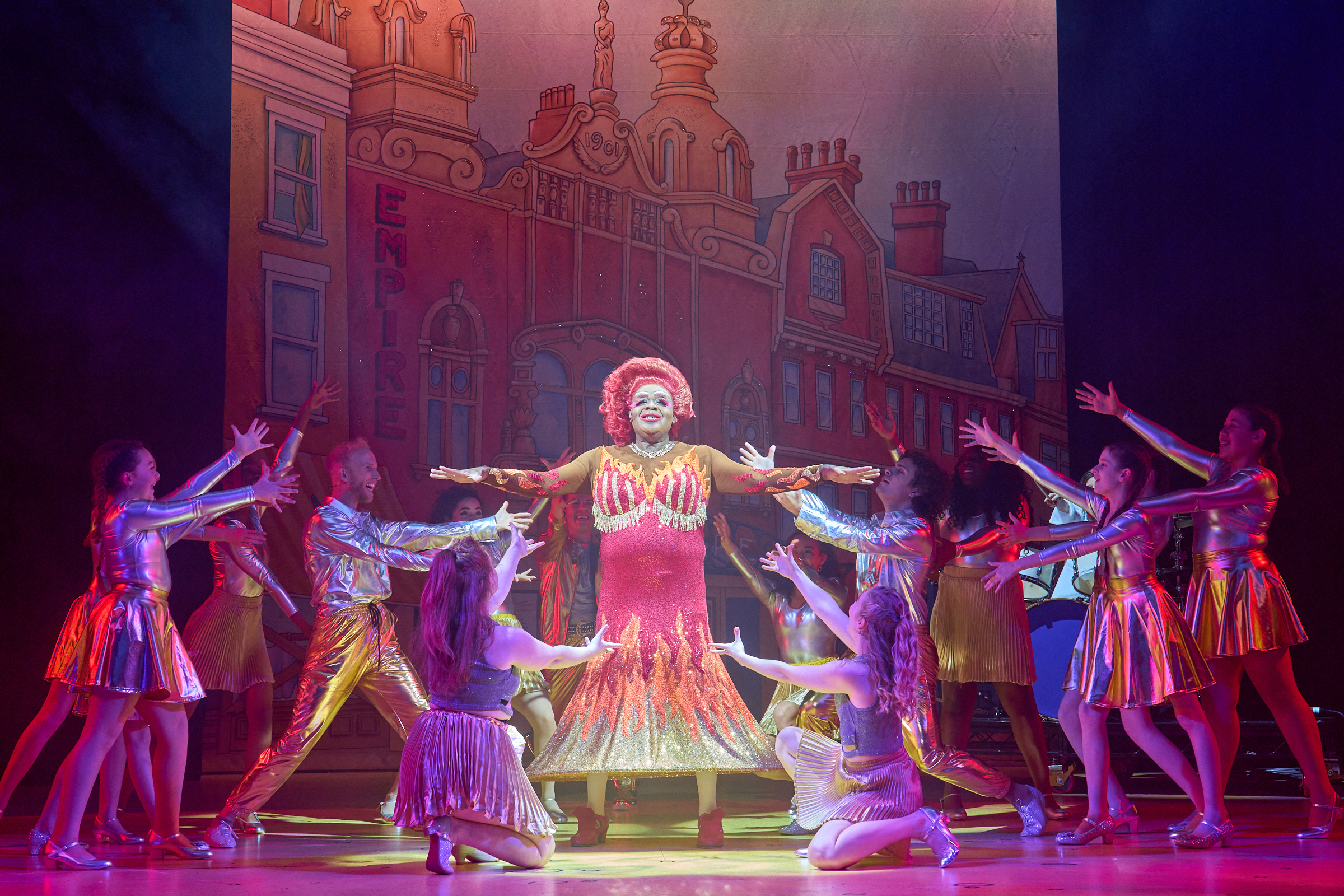 Hackney Empire-Now on until 31 Dec

Mother Goose – who, in fact, isn’t a goose, but whose best friend, Priscilla (Ruth Lynch), happens to be…a goose! Yes, it’s a little bit confusing. The heroine, Mother Goose, is even running a free beauty parlour for those wanting to become famous (for the sake of it?), whilst the moral of the story is that outward beauty and social media stardom can’t bring you happiness. Contradictory, right? Nonetheless, it’s full of colour, lights, live music, wonderfully elaborate costumes (Cleo Pettitt), numerous puns and an immersive, enchanting set. It’s very enjoyable and very charming.

Set in Hackneywood, near to the dark depths of Dalston underground, the narrative begins with landlord Squire Purchase (Tony Marshall) demanding rent from the overly benevolent Mother Goose, who loves providing beauty treatments so much that she inexplicably does it for free. Priscilla, the Goose, starts laying golden eggs – which is great news, and solves Mother Goose’s rent worries. But then all that gold begins to corrupt the beloved Mother Goose. She starts to turn into the unrecognisable money-loving-fame-seeking star, ‘OMG’. Suddenly, Mother Goose is willing to hand over her best friend, Priscilla, to the Demon Queen’s dark realm- all  for the promise of eternal youth and beauty. This turn of events is all part of the Demon Queen’s (Rebecca Parker) plan to steal Mother Goose’s soul by turning her into an instagram-addict, obsessed with followers, likes and her own appearance.

Clive Rowe, who is both the director and plays the title role, is an indispensable pantomime genius, appearing here in his 15th panto at Hackney Empire. Rowe delights the audience with his effortless wit, uplifting energy, and his relaxed, intimate manner, which makes you feel like you’re part of the events on stage.

Hackney Empire is celebrating its 120-year anniversary, and a small diversion during the plot showed the audience a reel of individuals (Julie Andrews, Louis Armstrong) who have graced the stage over the decades. This theatre certainly strikes me as being far more than a commercial enterprise; it speaks of community and inclusivity, with children and adults involved in the show together, and an atmosphere of enjoyment and relaxed entertainment shines through the action. The building itself is gloriously rich in gold and red ornamentation. This gives the space a nostalgic and fairytale-like feel which, rather than being grand or intimidating, is immersive and cosy, with a historical touch.

The portrayal of the Demon Queen versus Fairy Fame (Gemma Wardle) was unfortunate, since morality seemed to be paired with how much clothing you’ve got on. Parker wore hot pants, heels and fishnet tights, whilst Fairy Fame wore a modest long dress. The narrative created here seemed a little obsolete.

A few of the solo numbers (Steven Edis) in the second half were excellent, with songs from Fairy Fame and the Demon Queen, accompanied by dance sequences by André Fabien Francis. Brilliant vocals were also provided by Rowe himself.

This script (Will Brenton) struck me as a little too didactic and moralising for a Christmas show – who wants to think about AI taking over, giant ipads turning you into a zombie and phone addiction on a festive evening out? The moral of the story is, however, a good one, and it is hard to deny that art and performance are an incomparable way to communicate an important message.

Lucy’s passion for the arts began with drawing and painting at a young age and developed later on into a love of landscape painting and a degree in Art History, with a focus on Modernism and gender. Lucy has grown to love literature and acting in particular, and her experiences acting at the Edinburgh Fringe Festival have been formative, convincing her that performance can be an essential tool for communication and connection, as well as of course being a valuable source of entertainment.