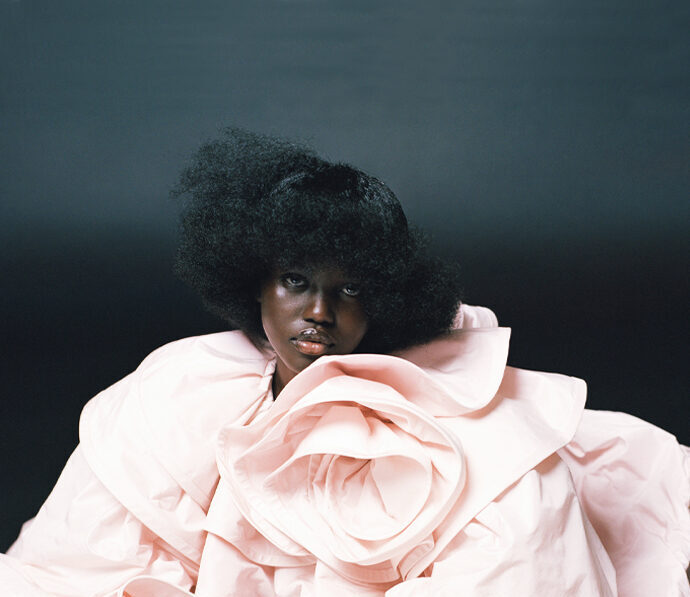 Review: The New Black Vanguard: Photography between Art and Fashion – Saatchi Gallery-Now on, until 22 January 2023

When everything was needed, we are everything. This is an exhibition that demands your spectatorship!

The New Black Vanguard titled after the book of the same name curated by American writer and critic Antwaun Sargent is a group photography show that declines the performatively whole. This photography presentation includes 15 established photographers, some of whom are new to the institutional guises, some who originate their authorship as digital natives, and some who grew up as their resident hometown documentarians. The once analogue is now evaluated as democratised through the digital. This democratising of access pervades every edge and corner of the exhibition. Saatchi’s white walls have been broken up with as the rooms open to landscapes of black portraiture – light emits from new background walls of fuchsia pink, scarlet red, and midnight blue. No compression, only brilliant saturation permeates – we, the viewer implicated in the eye, of a relationship where the artist and subject are in conversation and dynamic exchange. Photography is deliberate and purposeful as their chosen medium of expression, the works are raised by their image, – there are no false pedestals on display here, instead present are the multiplicities of blackness and a rich diaspora of cultural identities.

The New Black Vanguard brings an unclenching chasm to the homogenous depictions of blackness and the black body. Image by image forging a monolithic global network between these artist & fashion photographers and their gloried portraits of Black creatives from all sides of the lens and the world, touring London, Lagos, and New York. The camera is held as a documentarian in total symbiotic reverence by the artist, showcasing vanguards of power, representation, and revolution, – in all its many wrappings.

In wrappings of the fluid, Daniel Obasi, for instance in Moments of Youth, is held as the artist’s own, as the futurists’ own, as the subject’s own, as these four men at the helm of a seemingly traveling boat’s own – it is irrevocable. This visual activism is what we hold to the vulnerabilities of these instructional, and institutional infrastructures. These interrelationships of companionship and community in commonality take the front stage instead.

An exhibition highlight to move to is the moving-image projection room featuring a reel of 10 of the photographer’s videos which only builds on the visual language and further livens the photography of the preceding rooms. Like Kenny Germe’ of the New Gazes [ – one of 53 artists – an extension of the New Black Vanguard], their portrait The God Father takes to sun peeking to spotlight – to illuminate the once draped – it’s a full circle moment.

I am hopeful, growing from New Gazes, that the New Black Vanguard is not a singular project but rather a new norm, – is a powerful standard for future iterations. These are not new gazes but the significance of more access to the medium, as a platform to expand, where sensitivity has emerged in wanting to be seen. This show endeavours to be marked as a cry for access, for a systematic value change. A small legacy to hold against the white western hegemonic frameworks of photographic practice. This exhibition is a new precedent for the movement of agency, humanity, and the ignition of different consciousness and changed perspectives: as re-born rhetoric, one of more critique and more intention. When everything was needed, we are everything.

Devika is currently living and working in London, by trade an artist and snake oil salesperson. Devika graduated, as of September with a research MFA at Ruskin School of Art, University of Oxford.

The New Black Vanguard: Photography between Art and Fashion, is a groundbreaking exhibition featuring 15 international Black photographers contributing to a new vision of the Black figure and reframing representation in art and fashion. This exhibition is a celebration of Black creativity both in-front of and behind the camera. Featured works include Black stylists, models, make-up artists and creative directors who are bringing a radically new set of references and experiences to image making. The New Black Vanguard is curated by American writer and critic Antwaun Sargent who explores a new aesthetic of Black portraiture while examining the cross-pollination between art, fashion, and culture in the making of images. Sargent adds, “This exhibition is an exploration of this generation’s Black image makers who are bringing fresh perspective to photography. Image by image, they have created a loose global network around their art that powerfully centres identity, community and desire. The artists in this show profoundly reanimate the possibilities of contemporary photography.”

Organisation:
The New Black Vanguard is organised by Aperture, New York, and is made possible, in part, by Tasweer Photo Festival, Qatar and Airbnb Magazine

New Gazes, more work to be seen by: