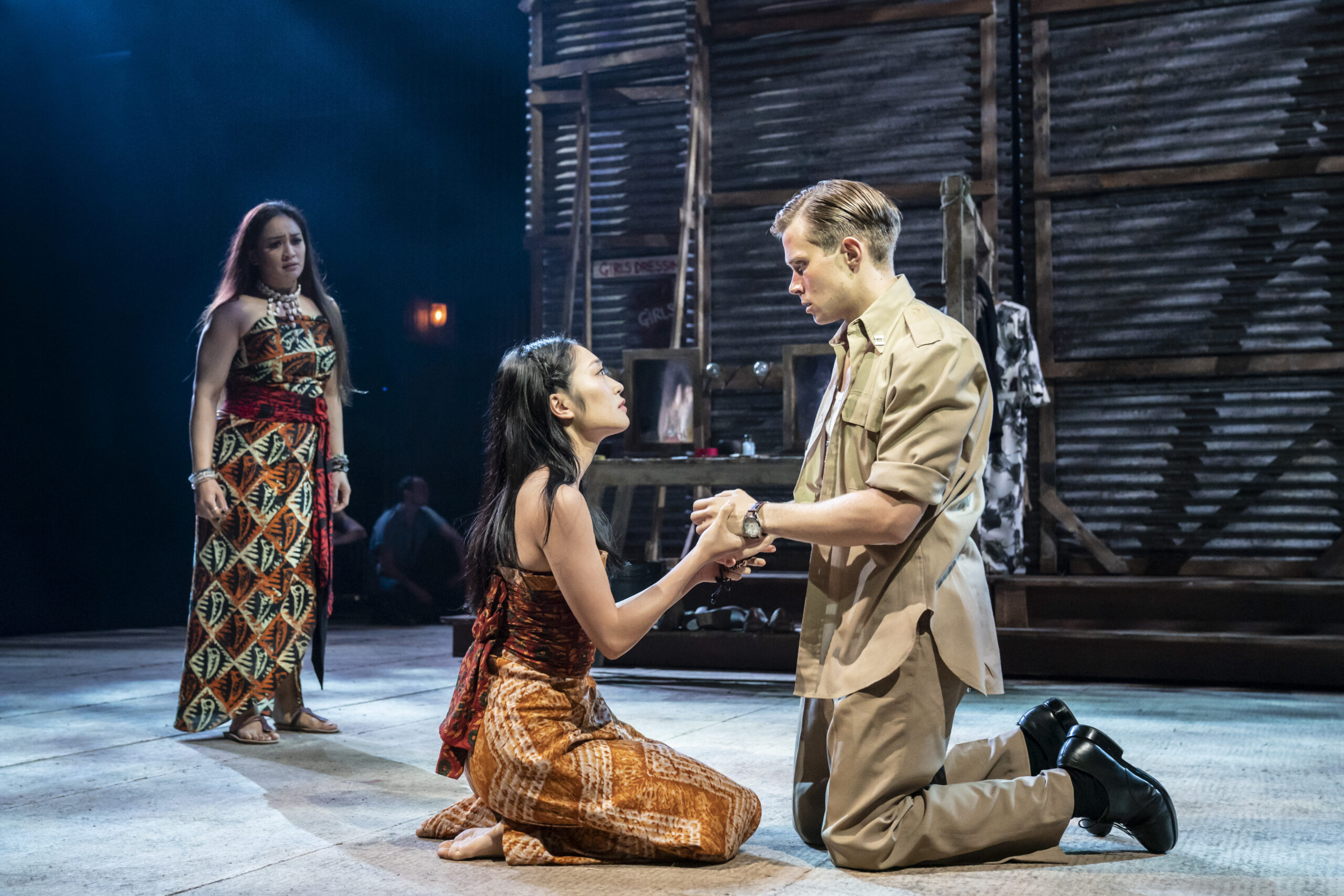 The story of ‘South Pacific’ follows Nellie Forbush (played by Gina Beck) who is working as a navy nurse on an island in the South Pacific during the Second World War, many miles away from her hometown in Arkansas. Nellie finds solace in French plantation owner Emile de Becque (played by Julian Ovenden) and the pair are quickly deeply enthralled and infatuated with one another entering a whirlwind love-at-first-sight romance. The pairs’ voices compliment each other perfectly during their duets; Beck’s high-pitched theatrical vocals and Ovenden’s unique low-toned tenor fusing together and making the audience feel their immense love for each other and their compatibility as a couple. Everything is seemingly perfect for the pair – they are deeply in love with each other and wish to spend the rest of their lives in the presence of one another. However, when Emile introduces his children from his previous marriage to a Polynesian young lady to Nellie, she is stunned by the fact that they are mixed race and feels as if she naturally can’t accept his mixed-race children or the fact that he had been with a woman of a different race.

Following this revelation follows two of the most memorable, musical numbers from Ovenden, “You’ve Got to Be Carefully Taught” a number  featuring Navy Lieutenant Cable (played by Rob Houchen)  highlighting that racism is not just naturally ingrained into individuals, rather it is something which is taught to them by the people they are surrounded by as he sings “You’ve got to be taught / to hate and fear / it’s got to be drummed / in your dear little ear.”  When it was first brought to Broadway the number was seen as brave and daring by Rodgers and Hammerstein, in a society that was building itself upon anti-communist and racist sentiments. Following this comes the standout musical number “This Was Nearly Mine” Ovenden fills the auditorium with pure and raw anguish, we feel our hearts shatter for him as he comes to terms with the woman he loves slipping through his fingertips.

A secondary romance is also introduced to the audience between Lieutenant Cable and Liat, (played by Sera Maehara) a Polynesian local and the daughter of Bloody Mary (played by Joanna Ampil) who works for the US navy servicemen.  Bloody Mary seeks to provide a better life for her daughter, in the number “Happy Talk” she encourages Cable to set aside their differences in class and race and pursue the blooming romance between himself and Liat. Rather than allowing her to settle for local farmers who will treat their marriage like a contract instead of truly loving her for who she is.

Love seems to triumph all as Nellie comes to terms with her ingrained hatred however more attention could be given to Nellie’s redemption and realisation of her prejudice. This could elevate the play a bit more and make the message more meaningful. Nevertheless, South Pacific still manages to hit the mark. The play’s revival is so important as its topics are still very relevant today, and it effectively presents these issues in a way which are engaging and yet encourages introspection.