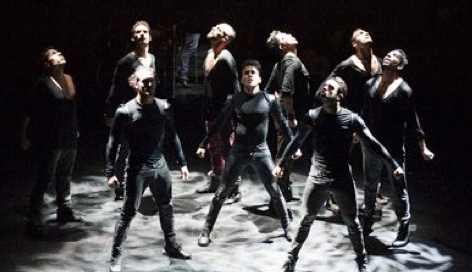 Rojas and Rodriguez, Titanium The Peacock, 5-23 May

Flamenco duo Ángel Rojas and Carlos Rodríguez present the UK premiere of an unprecedented fusion between flamenco and street dance. A troop of 13 men take to the stage, dancers and musicians, fusing the rich dance heritage of flamenco with the rawness of hip hop and break dance culture. The show has won a National Dance Award in Spain and received high praise in a tour across Europe.

Titanium features a multi-talented dance cast of three flamenco dancers, three hip hop dancers and three break dancers including Elihú Vázquez; Vázquez is the nine-fold winner of the b-boy championship of Andalucía, and was part of Spain’s winning team in Battle of the Year 2005, the most important annual international b-boy competition. The dancers are accompanied by a live band of four, mixing flamenco with hip hop beats.

Titanium had me intrigued and interested from the outset. Dance styles that would not normally be said in the same sentence (hip-hop, break dance and flamenco), thrown together on stage and compelled to battle it out against the sound of live musicians. Who wouldn’t be even slightly interested?

This male-only cast of thirteen had the task of fusing these three styles together, their argument for smooth exchanges between them being that all three styles ‘were born in the streets, and when their dancers dance, they are filled with a burning need to express themselves’.

There was definitely passion observed from all three styles on stage, the flamenco dancers worked slightly better against the traditional Spanish music, and for a flamenco novice as I am, it was a thrilling display of musicality and fervor.

The b-boys were absolutely incredible, demonstrating with jaw-dropping ease the most gravity -defying actions, whilst still managing to play around with the syncopation in the music. Every time they entered the stage, they created thrill and awe.

Although the style of music did not suit all of the genres of dance on display, the live music did add to the spectacle. The musicians and dancers were in a constant battle of rhythms, their personal passion and joy was tangible.

It would have been preferable if they stayed on the stage at all times, instead they would come in and out of vision, blocked by a moving backdrop; the poor guitarist who had to take on and off a chair every time.

The use of many props was again, slightly distracting. A piece of mirrored metal, a gigantic billowing skirt, boxes as well as an elastic cord was all thrown into the mix. The dancers were of strong enough technique that these items were unnecessary and felt more like ‘fillers’ than essential to the choreography.

The audience were completely thrilled by the performance, giving the entertainers a standing ovation at the end, a very rare sight in London! I did enjoy the piece, some moments were breath- taking, others, for me, were slightly indulgent and over dramatic. Take out the props and the ‘fillers’ and you would not only have a thrilling performance, but you would also have a more powerful, insightful choreographic work.