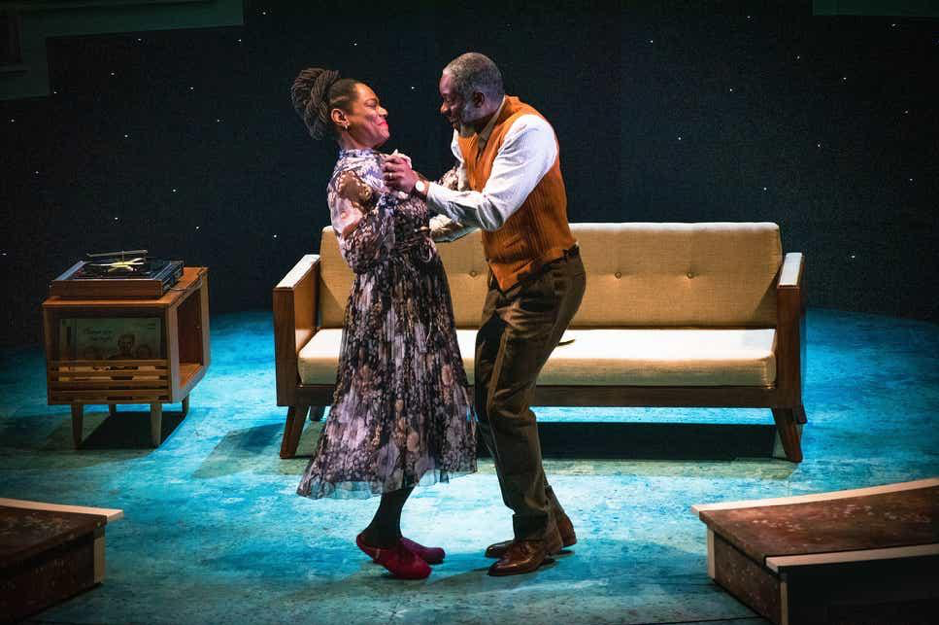 Writer Sian Carter’s debut play Running With Lions is a refreshing and touching story to see being told on the big stage. We follow an inter-generational  British Caribbean family trudge through the harmful stigmas that surround mental health, grief and traumas within the Caribbean communities. There is hopefulness in their future too and we see the family able to openly talk about struggle rather than suffering in silence. The play has a slow burner place, with long scenes and dialogue between characters allowing the audience to understand the intricacies and complexities of their lives, personalities, relationships and traumas. The soft lighting that is present for most of the play creates a mellow, atmospheric tone against the simple set of a revolving block of stairs perched on stage, these stairs transport us to the family home, the hospital, and the church among other locations.

After a flashback in which siblings, Gloria (Velile Tshabalala) and Josh (Nickcolia King-N’da) congratulate each other on new beginnings, Gloria moving out to start a family and Josh earning a spot to display his art at a famous gallery,  we are spun into the present day. Josh is no longer there and Gloria now has a teenage daughter, Imani (Ruby Barker). It’s a big day, Imani is getting ready for her last day of secondary school, her grandmother, Shirley (Suzette Llewellyn)  is rushing around making sure everything is prepared for a welcome home party for Gloria, who has been in the psychiatric ward after a bipolar episode and her grandfather Maxwell (Wil Johnson)  is getting ready to pick up Gloria from the hospital.  The cracks in the family’s relationship begin to show once Gloria returns home. She is dumbfounded by the missing framed images of her late brother that were once hung all around the living room and frustrated that all her mother seems to care about is throwing a perfect party for all the family, friends and church guests who are unbeknownst to the truth of where Gloria has been, her mother telling them she’s been on holiday. The tensions between mother and daughter are a focal point of the play. Shirley is desperate to uphold an image of pristine perfection to those around her, shielding herself in a tough shell so she does not crack. She disregards the existence of her late son in order to not have to grieve or feel any type of emotion that would shatter the polished window of perfection she hides behind, as well as disregard Gloria’s bipolar disorder. She tells her to not tell people about it especially at church, treating Gloria as if she is often just being dramatic and making her feel guilty for absent periods in Imani’s life. Gloria yearns for the family to be open and honest with the struggles that surround them; celebrating and honouring Josh rather than pretending he was never there, not caring so much about what the church would think if they knew she had bipolar and supporting her and her mental health rather than treating her as if she is a burden. Imani wants to be able to be independent and make decisions for herself rather than have her mother attempt to control her life in an attempt to make up for the lost time. Their constant conflict presents the conflict in mindsets between generations, highlighting that the older generation can often learn from their younger counterparts.

The play is not without laughs and light-hearted banter. The relationship between Maxwell and Shirley is endearing at points, as Maxwell puts his old records on and dances around the living room with Shirley in his arms or as they reminisce over Maxwell as a smooth-talking young man trying to win Shirley and he insists he hasn’t lost his charm. There are many light-hearted and heartbreaking scenes that highlight the character of Maxwell that are some of the best parts of the play.

Running with Lions touches on your emotions in every way possible, immense joy, sadness, anger, hurt, frustration, and it teaches us that embracing these emotions in all their fullness is better than bottling it all up. In the final scene of the play, as the family prances around to the sounds of The Temptations on the record player there is a sense of warmth and hope.

Running with Lions is playing at the Hammersmith Lyric Theatre until March 12. Book here: https://lyric.co.uk/shows/running-with-lions/