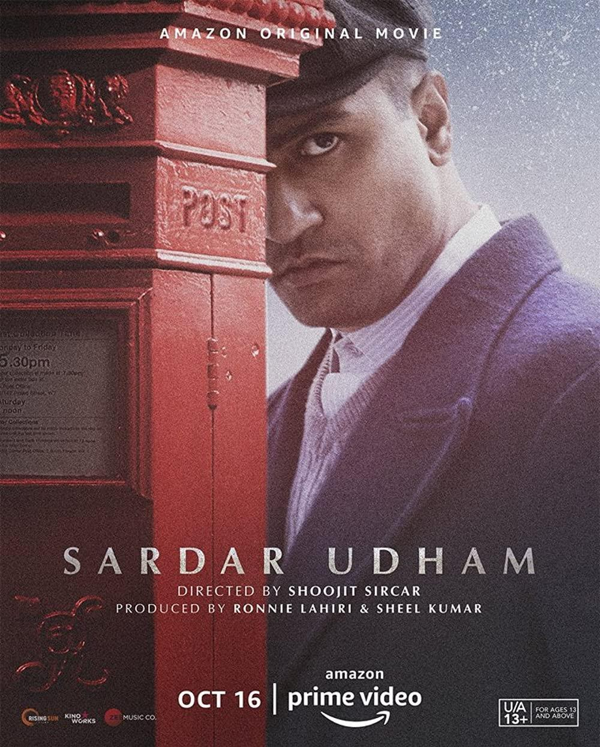 Sardar Udham: A biographical tale of a profoundly haunted revolutionary

On April 15th 1919, a historic garden in India, Jallianwala Bagh, was subjected to a horrific, barbaric massacre wounding and killing hundreds of people who peacefully gathered to protest against the arrest of pro-Indian independence leaders Dr. Saifuddin Kitchlew and Dr. Satya Pal. Sadar Udham Singh, who survived the massacre, has carried the weight of the devastation, sorrow and anguish of this catastrophe throughout the years and embarks on a personal quest of revenge and retribution for the atrocities imposed upon the Indian people. Director Shoojit Sircar’s ‘Sardar Udham’ is a gripping take on the life of freedom fighter and revolutionary, Sadar Udham Singh. The biographical film spans across a timeline of Singh’s life presented in a style that jumps across periods of his life in a non-chronological style. The film shows Singh growing up in an orphanage and working in a textile mill as a young 20-year-old to his days as part of the Indian independence movement, on the run from authorities. We are then exposed to Singh’s assassination of Michael O’Dwyer – who was behind the massacre that haunted Singh’s being, right from the day the traumatic massacre occurred.

The cinematography and performances of the film greatly complement one another. A particularly visually stunning, yet also eerie scene, sees Singh trudging through a snowy winter landscape, completely isolated and alone. This birds-eye view shot emphasises the greatness of his solitude in this vast space. This shot feels like a representation of Singh’s journey for justice for those killed on April 15th, as despite very little companionship and help, Singh is mostly a lone fighter. Throughout the film, Vicky Kaushal displays a fantastic performance of Singh as an individual consumed and engulfed by the pain caused by the massacre of his loved ones, as well as the collective agony felt of the struggles imposed upon the Indian people. He is shrouded in mystery, but his attachment to his cause is greatly felt as his motives are revealed. Sircar’s presentation of Singh is contrary to what many may assume of a typical freedom fighter, as he doesn’t have a large following and isn’t seen to possess a charismatic or charming personality.  Perhaps this is why his story isn’t famously taught or spoken about. However, Singh does not lack the relentlessness or inexorability of what one would consider a freedom fighter, as he is ready for any consequences his actions will bestow.

Right from the beginning to the end, as well as being engrossing, the film was also an emotionally depleting watch for me. One of the most graphic and heart-wrenching scenes occurs where we see the portrayal of the massacre, seeing the images of an abundance of helpless blood-stained bodies scattered amongst the place, putting into perspective the height of the incident, and it left my heart heavy hours after finishing the film. The poignant atmosphere of the film is needed to accurately present the impacts of the horrors of colonialism and the relationship between England and India. It is essential viewing, presenting a face of the Indian independence movement that derives from the images of pacifism that I and many others have been taught to associate with the fight for Indian independence. It is quite a shame that the Indian jury rejected the Oscar nomination of Sardar Udham, as more traction for the film would have been a perfect way to educate thousands on a forgotten part of history.

Sicar’s portrayal of the life of Sardar Udham Singh is a raw, real and haunting story of an unsung martyr that needs to be heard.

The movie traces the journey of Indian freedom fighter Udham Singh, who travels to London and assassinates Sir Michael O’Dwyer, the former lieutenant governor of the Punjab in India, on 13 March 1940 – he was the man responsible for the massacre of over a thousand innocent Indians including women and children in the Jallianwala Bagh Massacre of 1919* (see further details below).

Udham Singh’s act of revenge was a significant moment leading to India’s independence from British Imperialism in 1947.

Udham Singh was subsequently remanded in custody at Brixton Prison, tried and convicted of murder and hanged in July 1940.

Britain never formally apologised for the massacre but expressed “regret” in 2019. Here are some instances where former Prime Ministers David Cameron and Theresa May have spoken about the incident.

*Background information on the Massacre at Jallianwala Bagh

The Jallianwala Bagh massacre, also known as the Amritsar massacre, took place on 13 April 1919. A large but peaceful crowd had gathered at the Jallianwala Bagh in Amritsar, Punjab to protest against the arrest of pro-Indian independence leaders Dr. Saifuddin Kitchlew and Dr. Satya Pal. In response to the public gathering, the British Brigadier-General R. E. H. Dyer surrounded the Bagh with his soldiers. The Jallianwala Bagh could only be exited on one side, as its other three sides were enclosed by buildings. After blocking the exit with his troops, he ordered them to shoot at the crowd, continuing to fire even as protestors tried to flee. The troops kept on firing until their ammunition was exhausted. Estimates of those killed vary between 391 and 1000+ people and over 1,200 other people were injured of whom 192 were seriously injured.

Responses polarized both the British and Indian peoples. Eminent author Rudyard Kipling declared at the time that Dyer “did his duty as he saw it”.

The level of casual brutality, and lack of any accountability, stunned the entire nation, resulting in a wrenching loss of faith of the general Indian public in the intentions of the UK.

Britain never formally apologised for the massacre but expressed “regret” in 2019.