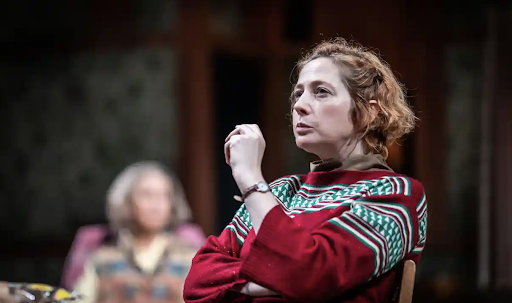 Savage but funny – The Beauty Queen of Leenane Review

Firstly, if you’re not from Ireland or the UK and English isn’t your first language, be prepared that for the first couple of minutes of the play you won’t be able to understand anything…This is exactly what happened to me, but once my ears (and brain) adjusted to the character’s strong Irish accents, I could relax and enjoy the Beauty Queen of Leenane – a savage but funny play.

Set in Leenane, Ireland in 1995 (pre the Good Friday Agreement and before the vote on marriage equality or bodily autonomy) the play mirrors the characters’ personal circumstances with the political state of the country. It shows an Ireland that is in transition but trapped in this gut feeling of real independence that is almost impossible to achieve.

Portrayed as a parallel to the main character’s fate – the co-dependent mother-daughter relationship between Maureen (Orla Fitzgerald) and Mag (Ingrid Craigie) shows that the characters’ lives are defined by violence, anger, sadness and frustration.

While Maureen, a middle-aged virgin craving intimacy and love, gets more and more frustrated with her life and tries to escape from her duties of caring for her scheming, needy mother; Mag, on the other hand, fuels her daughter’s unhappiness by manipulating her relationships and wants Maureen completely for herself.

Building up to an emotional explosion, especially after Mag manipulates Maureen’s love life when her daughter meets a man called Pato, this play does not offer us a happy ending. Instead, the characters continue to be trapped between their situation and aspiration. And even after Mag dies from the brutal attacks by her daughter; Maureen’s life does not improve since her loved one has run off with a different woman.

Exploring co-dependent relationships as well as topics such as boredom, frustration and loneliness, the Beauty Queen of Leeanne ends with Maureen alone in the house, resembling her mother’s picture and fate when she sits down on the rocking chair as the curtain closes.

Martin McDonagh’s script, which critics believe to be “as vital as its rage”, has been adapted by director Rachel O’Riordan for the Lyric Hammersmith and joined by a cast of Ireland’s best talent: Adam Best, Ingrid Craigie, Orla Fitzgerald and Kwaku Fortune. The set design invites the viewer into the mother and daughter’s cold-looking living room and kitchen with big windows exacerbating the darkness in and outside the characters’ lives.

Tickets are available at: https://lyric.co.uk/shows/the-beauty-queen-of-leenane/.

Orla Fitzgerald as Maureen in The Beauty Queen of Leenane. Photograph: Helen Maybanks