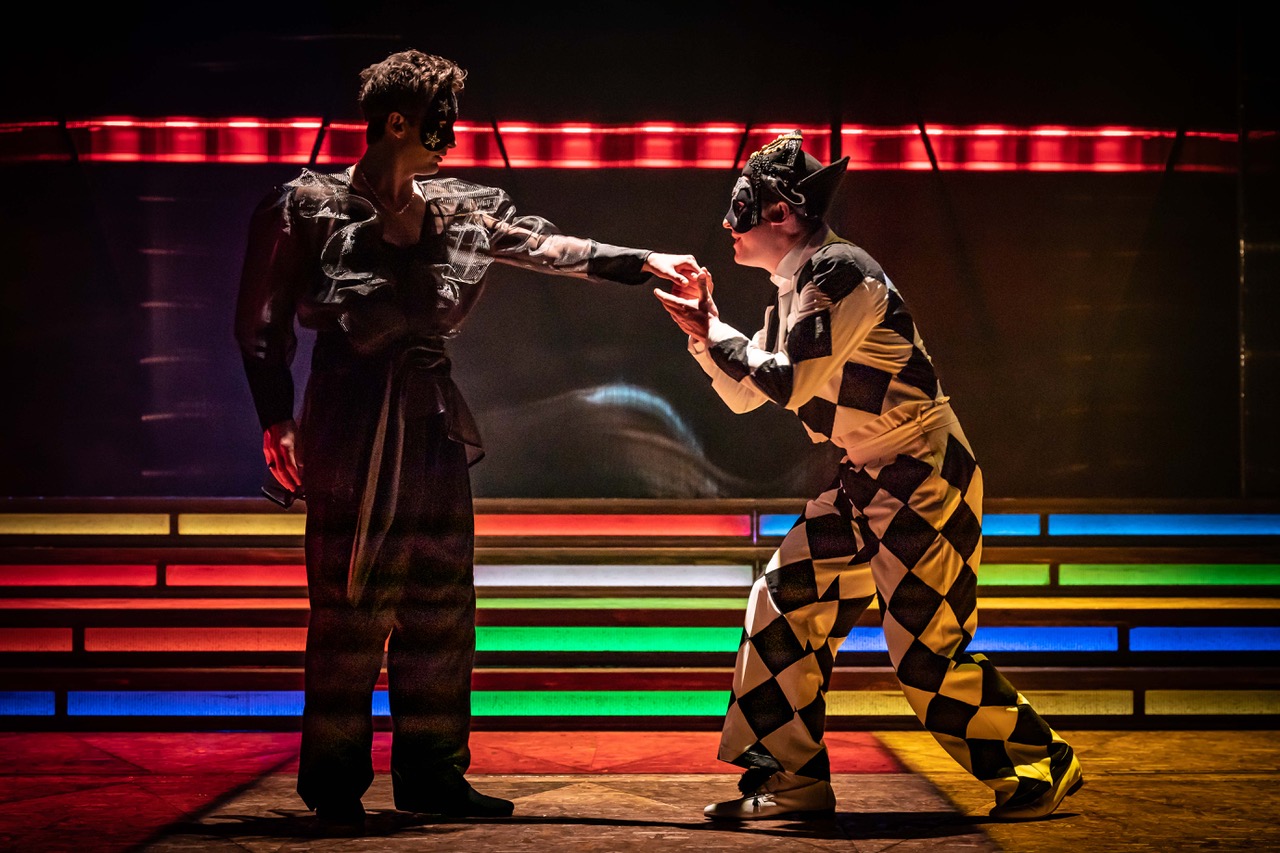 Mike Bartlett’s Scandaltown is a modern restoration comedy that combines the heightened and melodramatic nature of 17th-century restoration dramas as well as humour and satirical content that reflects current times. It successfully manages to combine these different periods to form a ‘New Restoration’. This allows the audience to experience flamboyant costumes and hyperbolic interactions of restoration comedies amidst politically topical jokes that can only be understood in a present-day context. These jokes and spoofs include digs at the pandemic parties thrown by the governments, satirical comments on the hypocrisy of the right-wing and the overzealousness of liberal social justice on Twitter. Amongst the themes of political satire, Bartlett’s script includes silly gags, innuendos and exaggerated content that makes the audience laugh as well as meaningful monologues about morality and virtue.

Scandaltown begins as Phoebe Virtue (played by Cecilia Appiah), an uptight, idealistically hopeful and socially conscious young woman, tells her Aunt Julie (played by Emma Cunniffe) she is worried about her twin brother Jack (played by Matthew Broome) who has recently moved to London. Phoebe believes London has contorted her brother’s reputation and caused him to have fallen into a sunken place of meaningless sex, class A drugs and right-wing, capitalist ideas. When a letter arrives from her brother that seems to disprove her suspicions, Phoebe is relieved – until a peculiar white powder seeps from the envelope and she realises the letter has been written on the back of a page ripped out from the Telegraph. Phoebe is horrified, she decides she has no choice but to travel to London in disguise to catch out her brother’s dishonest life and revert him from a life of villainy to a life of virtue. Life in London is exactly what Phoebe suspected and more as she gets a glimpse into the scandalous web of sex, adultery, drugs, secrets, social climbers and constant drama that Jack’s life entails. Amidst the scandal of London we meet other characters; Lady Climber (played by Racheal Stirling), always ostentatiously dressed, eager to do anything to climb the social ladder and propel her career;  Hannah Tweetwell, a straightforward, social media manager with suspicious motives who is employed by Lady Climber to help her rise to fame; and Matt Eton (played by Richard Gouldling), an Eton graduate and Tory politician – a caricature of both these attributes who is introduced to Lady Climber by Miss Tweetwell.

The set design, created by Good Teeth,  has its best moments during a  sultry and sensual sex scene which is presented as a cabaret-inspired yet also humorous dance, the stage engulfed by a provocative dark red light so that the silhouettes of the characters are visible. The costume design, by Kinnetia Isidore consists of an impressive 40 plus costumes. It sees both modern and edgy clothing worn by characters such as Hannah Tweetwell as well as extravagant and elegant gowns worn by Lady Climber.

Bartlett and the cast of Scandaltown have shown great versatility with the play. It is shrouded in the scandalous going ons of soap operas and TV dramas yet still manages to touch on topical issues, as well as make its audience laugh hysterically. It is showing at Hammersmith Lyric Theatre until May 14th. Book tickets here: https://seatplan.com/london/scandaltown/?gclid=EAIaIQobChMIu8jltKCn9wIVa4BQBh2fugNzEAAYASAAEgKuA_D_BwE