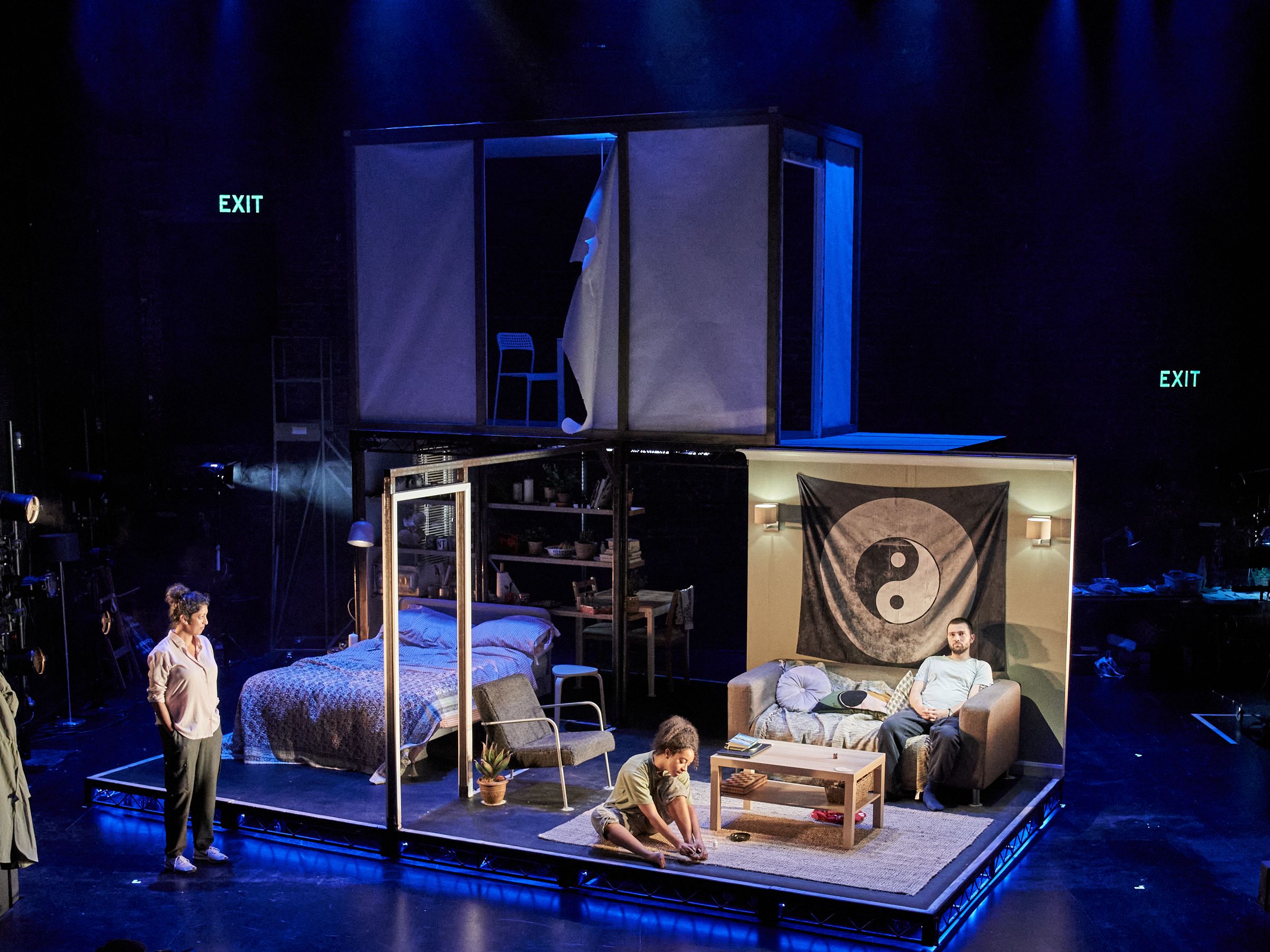 ‘That Is Not Who I Am’ – Royal Court Theatre Review

As the house lights go down, a disclaimer is projected onto the screen on stage; the play you are about to see is not the play advertised…the true story we are about to tell is under embargo by the Home Office…the Royal Court Theatre has changed names to protect themselves.

‘That Is Not Who I Am’ begins from the moment you book a ticket – sold as a show by new playwright Dave Davidson exploring one man’s experience of online identity theft, the promotional copy reads “​​Did the real him ever exist in the first place?”. It’s not until you’re sitting in the theatre that you realise, he didn’t. In fact, Dave Davidson didn’t ever exist either. What is actually performed is ‘Rapture’, a new production written by Olivier Award-winning playwright Lucy Kirkwood.

‘Rapture’ tells the story of Celeste and Noah Quilter (Siena Kelly and Jake Davies); an activist couple who attempt to dismantle the government. The production follows their relationship from its beginnings, a blind date where they are soon discussing chemtrails and 9/11 theories. They’re half-joking, mocking each other for being crazy. As the production progresses we see them marry, switch jobs, and have a baby – all while becoming increasingly politically active; disillusioned and distrusting.

Naomi Dawson’s set is clever – a cross-section of the couple’s house, spun by stagehands as the actors move from room to room. Here, we see the couple in their intimate moments – the conversations behind closed doors. The writer, Lucy Kirkwood also appears as a character, played by Priyanga Burford. Burford enters the stage, with script in hand, often – recounting her research into the case; this reddit thread said…, one eye-witness saw…, before moving to one side and watching the actors continue with the scene.

‘Rapture’ will make you question everything. Cleverly, this play about conspiracy theories becomes a conspiracy theory in its own right – positioning itself just enough on the rational side to make you unsure if it’s true or not. As you leave, you’ll find yourself googling ‘the quilters’, and ‘activist couple killed by government’.

However, when you find it’s not true, it’s a little disappointing – maybe it’s because the Royal Court isn’t as radical as you’d believed in those first ten minutes? Or maybe it’s when you realise we’re not really on the edge of a political revolution? That said, the production is affecting. It’s not immediate and gut-wrenching like some of the Royal Court’s previous shows, but it’s persistent and niggling. Your mind will drift back to it in the everyday – as you tap on to the tube, checkout at a self-service, or withdraw cash from an atm.

‘That Is Not Who I Am’ is running at the Royal Court Theatre until 16th July, tickets are available here