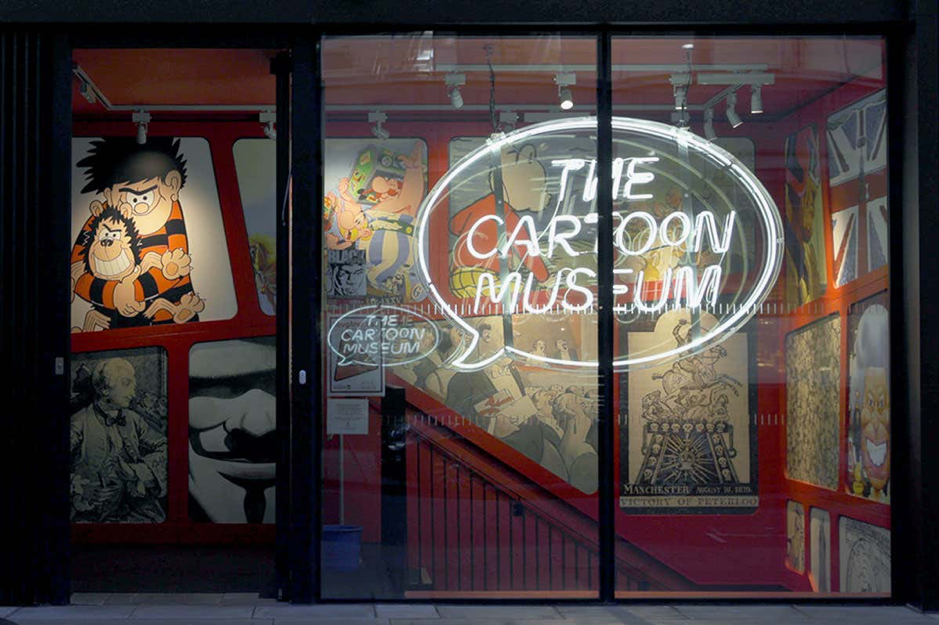 Not far from Oxford street, in a parallel street to the countless shops and restaurants of Bloomsbury, is a curious place that would catch the eye of even the busiest shopper that passes by. A big neon speech bubble, “The Cartoon Museum”, invites you to proceed through a colourful entrance covered in comic strips. As one goes down the stairs that lead to the beginning of the exposition, it is hard not to get overflown by some sort of childish excitement.

The museum stores a collection of over 6,000 original artworks in addition to a library of over 8,000 comics and books. The exposition displays over 250 of these original prints in a chronological experience that retraces the birth and evolution of the satirical cartoon. Despite their historical and geographical variety, all the sketches are connected by the same red thread: a zesty and ironical view on life that is not afraid to shout out the truth and say the unsayable. Whether their goal is to shock, sensitise, denounce or flat out mock, they always hit the mark and will get more than a few chuckles out of you.

Even though the cartoons are often quite political, we are left to draw our own conclusions as the exposition doesn’t take any stance or overexplain any aspect of the sketches. The simple descriptions next to every drawing let the pictures express themselves without over-politicising them or over-explaining the historical background: the most important aspect is the humour, and everything else comes in second place.

The historical layout of the exhibition gives an interesting insight into the evolution of technique and comedy through the ages, as one witnesses the transcendence of some timeless gags that still make us laugh today. One goes from the French critics of nobility during the French Revolution, when artists were given unprecedented freedom of expression, to anti-Nazi propaganda and caricatures of Donald Trump.

Furthermore, the museum encourages a creative interaction with the cartoons, as it offers multiple workshops for the public to enjoy. We are given pen and paper and can choose multiple activities such as making a caricature, learning to draw Beyoncé or inventing our own lab monster. In addition to the workshops, the museum is hosting a public experiment that aims to explore the psychology behind cartoon humour. Spectators can choose to take part in it until June 5th, and will be given multiple pairs of cartoons of whom they have to choose the funniest.

Overall, the Cartoon Museum is a little hidden gem in Soho that celebrates the art of irony and humour with levity and taste. Get your tickets or check out their sketching classes at https://www.cartoonmuseum.org