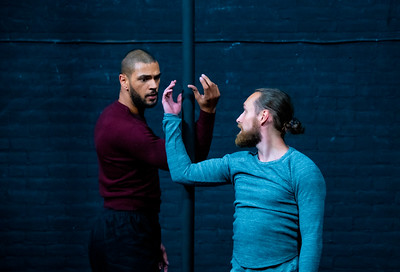 The Chosen Haram is an LGBTQ circus performance dealing with different themes such as faith, sexuality and addiction. It’s not Adam and Eve but Ahmad and Steve! This circus piece tells the story of two queer men, meeting through a dating app and trying to overcome their socio-cultural differences. In this non-verbal performance, Sadiq Ali who graduated from the National Centre for Circus Arts plays a young man torn apart between his religious beliefs and his sexual orientation. Facing him is the actor and circus artist Hauk Pattison who has appeared in productions at the National Theatre and plays a young man hungover in the middle of bottles of alcohol, living a life of excess. When they meet, they start a powerful sexual relationship that will not last as the collision of their different worlds puts them in an identity crisis.

The Chosen Haram was part of the Jacksons Lane program for the London International Mime Festival running from the 14th January to the 6th February 2022. ‘Haram’ is an Arabic word to describe something that is forbidden by Islam. Sadiq Ali, the lead artist and performer created this production performance following his own experiences in life.

“Growing up I had the realisation that my sexuality didn’t connect with what I was being taught about the world. This left me as a young queer person confused, self-loathing and full of shame. Unfortunately, to deal with those feelings I had to numb the world around me and then found myself shrouded in addiction.”

He chose to use two Chinese poles which both performing artists specialise in. They play around these poles as they are in the early stages of their relationship and they take refuge on top of them when they are afraid of the consequences of their sexual relationship. The two actors play beautifully with those poles, integrating them as storytelling tools and moving their bodies in the air as they are stuck in their identity crisis. This circus piece is a multiple-sens experience where you will be immersed in a nightclub atmosphere after entering the peaceful atmosphere of a mosque and before living the tumult of city life.

The Chosen Haram portrays a contemporary theme about the highs and lows of relationships in the modern world and the challenges faced due to sexuality and faith.

You can learn more about Jackson Lane and get your tickets for future performances at: https://www.jacksonslane.org.uk/whats-on/.

Reviewed by Alix Berthelot–Moritz- Alix is a volunteer writer for Abundant Art. Originally from Normandy, France, she follows her passion for journalism and art by studying at the European Political and Social Sciences of UCL, London. As an international student living in London, she is determined to fully experience and discover the entirety of the city’s vibrant arts scene and share the beauty of it through her writing.