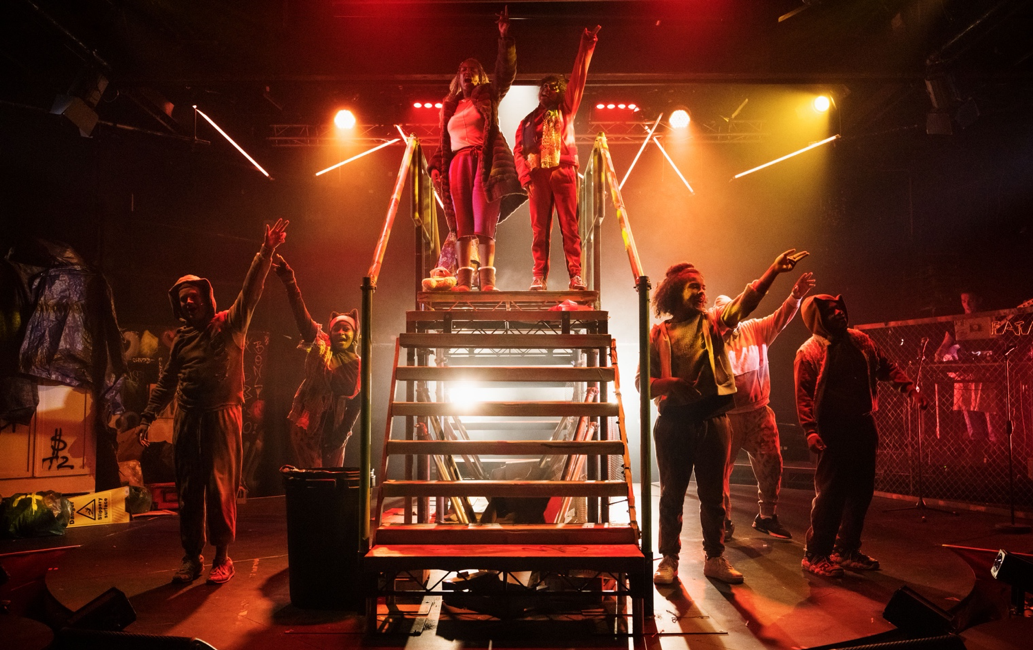 “The Concrete Jungle Book” is a vibrant and surprising new take on Kipling’s classic, a somehow grim retelling of the childhood tale through rap, hip-hop and physical performances. Writer and Director Dominic Garfield plays with the original story to offer a completely new experience that projects us into the harsh reality of street life, a significantly different type of jungle. At a time when youth homelessness is peaking in the UK, this musical finds a way to hit all the right spots by being realistic and raising questions whilst still keeping a colourful and high-energy vibe. HighRise Theatre has worked on this musical with Centrepoint, UK’s first youth homelessness charity, integrating no less than 32 young people in the project.

In this “grown-up” version of the tale, we follow Mo (Lauryn Louise), a 16-year-old who escapes her youth centre and has to explore the harsh realities of city life. Her adventure is mainly determined by the people she will encounter on her path: a snake veteran, monkey gangs, an imposing orangutan… The “bear of the streets” Baloo (Lesley Rietta Cobbina), one of the rare positive figures she encounters, teaches her the survival code of the city and decides to protect her. Meanwhile, her carer Bagheera (Joseph RA Lindsay) runs after her in the hopes of bringing her back home. All the performances are delivered with an animalistic physicality that mimics the behaviours of the various animals, giving an energetic and chaotic aspect to the whole musical. In addition to their impressively physical acting, the actors all delivered in terms of singing, rapping and acting, balancing emotional scenes and lighter moments with brio.

The set design (Ethan Cheek) of the graffiti-covered stage was particularly spot-on, and the use of creative additions such as neon lights and incense created a visually remarkable experience. The musical aspect of the show was also memorable, as the story navigated in a universe of rhymes, rap, reggae, hip-hop, grime and dance. The opening performance was enough to set the tone for the rest of the show and catch the audience’s interest from the first few minutes.

The musical offers a coming-of-age story with authenticity and passion and doesn’t lose itself in metaphors when representing the harsh reality of street life. It manages to build a realistic and compelling universe that vibrates with energy and young talents.