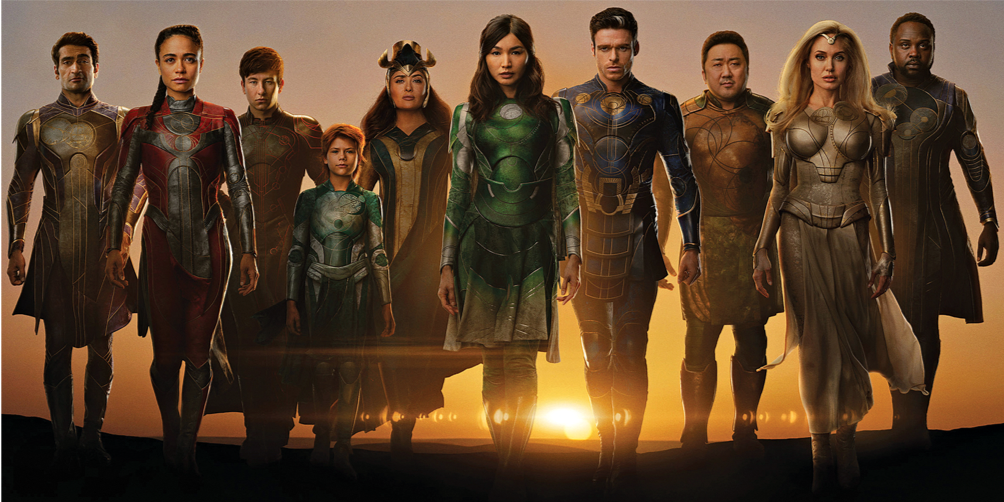 When it comes to the Marvel Cinematic Universe, the franchise has become a classic example of pop culture, with record-breaking box office performances and loving fans of all ages all around the world. After the success of the Russo brothers’ “Avengers: Endgame” and Jon Watt’s “Spiderman: Homecoming”, the franchise has taken a break during Covid, and has recently made a comeback with a list of new movie announcements labeled the “Phase four of Marvel”. One of the most anticipated movies was Chloé Zhao’s “The Eternals”, which has officially been released this Autumn. This movie is quite different from the rest of the franchise, as it adds a dimension of personal drama and existential questioning on top of the typical action and wittiness of Marvel movies.

The story introduces us to the Eternals, a team of 10 superhuman beings created by the makers of the Universe, the Celestials. The Eternals are tasked with the mission of protecting humanity over the centuries from the Deviants, a race of monsters that keep terrorising Earth. Once the Deviants are all finally exterminated in 1521, the Eternals are left on Earth without further instructions, except to not intervene in human affairs. However, when the Deviants sudden reappearance in modern times forces the team to reunite, the Eternal Sersi (Gemma Chan) starts unveiling the truth of their existence and discovers that nothing is as it seems.

Despite having a great number of characters, the film manages to focus on each of the ten heroes and gives them significant depth. Although Sersi might be considered the main character, the other members of the team are all given strong dynamics and struggles. Their personal adventures each lead to different reflections on varied existential topics: Thena (Angelina Jolie) on the importance of memory, Ikaris (Richard Madden) on the struggle to decide what is right, Sprite (Lia McHugh) on the downsides of immortality, Druig (Barry Keoghan) on the value of free will… The movie balances these personal dramas with the bigger-scale epic adventure of the Eternals trying to save the world. However, some character development becomes confused in the third act, as some members of the team such as Kingo (Kumail Nanjiani) and Sprite make some unexpected choices that make little sense plot-wise.

Another important element of the movie is the diversity and inclusivity aspect, which has been heavily marketed by Marvel. The Eternals are far from being the same cookie-cutter white and handsome male superheroes so often seen in movies of this genre, as they have members that are queer, female, disabled, overweight and of varied race and age. Instead of being a mere token for political correctness, this diversity is justified within the narrative and enriches the characters rather than transforming them into two-dimensional stereotypes. This is a great step in superhero movie inclusivity from MCU’s first woman of colour director.

Despite the overall serious and existential tone of the movie, the long-running time flies by thanks to lighter passages of action sequences and banter between the characters. Zhao has a tendency as a filmmaker to shoot on beautiful and vast landscapes, a habit that she doesn’t break in this movie, as most of the scenes are shot on location. The CGI is used relatively little until the final act, giving a much-needed grounded aspect to the story.

Overall, the movie can be considered a philosophical and psychological drama disguised as an epic superhero movie that will delight audiences of all ages. Get your tickets at Barbican cinema at https://www.barbican.org.uk/whats-on/series/new-releases.