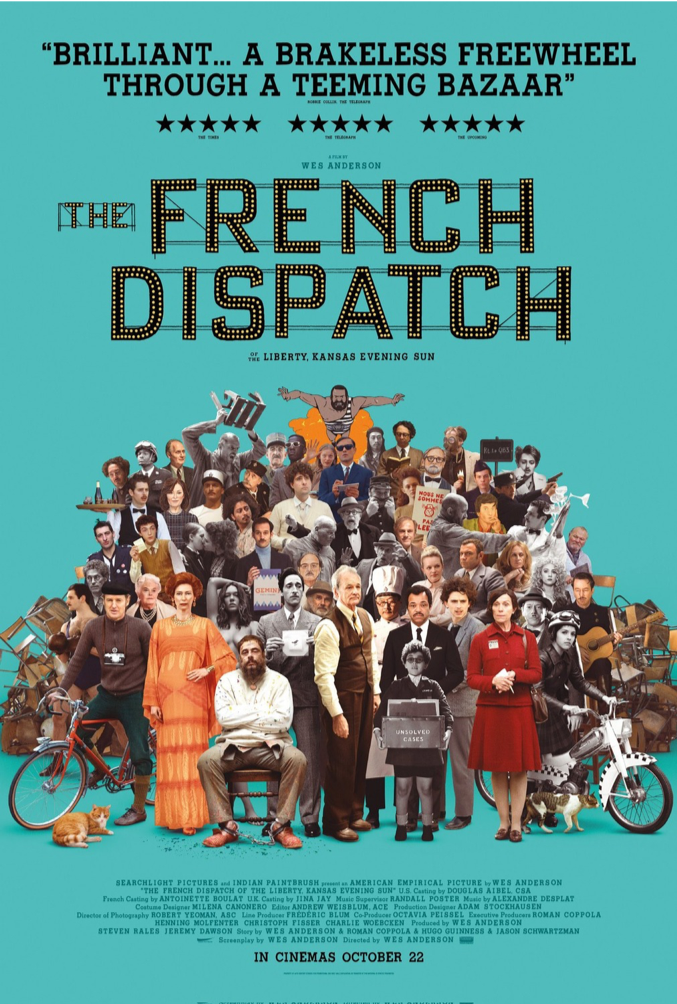 Cinemas are currently experiencing a long-awaited revival after the pandemic and a multitude of long-anticipated movies are finally being released. In the middle of this cinematic storm, one of the most acclaimed movies is “The French Dispatch”, the brand new movie by acclaimed director Wes Anderson. Impossible to miss, the film is currently in every cinema in London and showcases at the ICA until November 11.

Following the death of its Editor Arthur Howitzer Jr. (Bill Murray), the American magazine “The French Dispatch” issues one last edition, including an obituary, a travel guide, and three short chronicles under the sections “Painting”, “Poetry” and “Food”. The structure of the movie follows the structure of the magazine: the plot is divided into five sections that are introduced with chapter headlines and are heavily narrated as if we are reading the magazine.

The obituary introduces us to the members of “The French Dispatch” as well as the strict but beloved figure of the deceased editor, Howitzer. This introduction alone sets the tone of the movie, as it offers a succession of eccentric scenarios and characters, all within a rapid pace of humour and colourfulness. After the brief “travel guide” section introduces us to the French town of “Ennui-sur-Blasé” (literally “Boredom-on-Dull” in French), the “reading” of the magazine continues with three stories: “The Concrete Masterpiece” retraces how an institutionalised criminal painter invents abstract art out of love for his prison guard; “Revisions to a Manifesto” is a story of youth and love in the heart of student revolts; finally “The Private Dining Room of the Police Commissioner” is a suspenseful tale of food, identity and kidnapping. These three chronicles are presented by their respective writers with rather fast pacing which might be a little confusing to a less attentive viewer, and they definitely require multiple viewings to be appreciated fully.

From a technical perspective, Wes Anderson delivers perfectly: lovers of “The Grand Budapest Hotel” and “The Royal Tenenbaums” will be delighted, as every single frame of the movie is symmetrically perfect and extraordinarily original. Despite being led by oral narration, the visual aspect is probably the strongest element of the movie, and although the three chronicles are mostly shot in black and white, this doesn’t take anything away from the visual originality of the film. In addition to being a patchwork of stories, the film is indeed also a patchwork of different techniques: it jumps from extremely bright colours to black and white, as well as having some elements of cartoon animation, written sections, still frames, PowerPoint presentations, tv show segments, and entirely French-speaking characters. These technical creative liberties mixed with the original scenarios of the stories make for an extremely rich, eccentrically poetic movie, that could however confuse some audiences more familiar with a more “classical” structure in cinema.

Despite being borderline fantasy stories, the chronicles are full of humanity as they tell very touching tales with attaching characters. The performances of the stellar cast are all worth mentioning, although the fast pace of the movie and the succession of different stories only allow for a very short screen time for each of the actors. Benicio del Toro, Tilda Swinton, Adrien Brody, Léa Seydoux, Timothée Chalamet, Jeffrey Writer, and many more are extremely memorable in their respective roles.

The movie is a love letter to journalism and art, packed in metronomically precise pacing and an immaculate mise-en-scène that will be thoroughly enjoyed by any Wes Anderson admirer. Get your tickets for an ICA cinema screening at https://ica.art/films/the-french-dispatch.