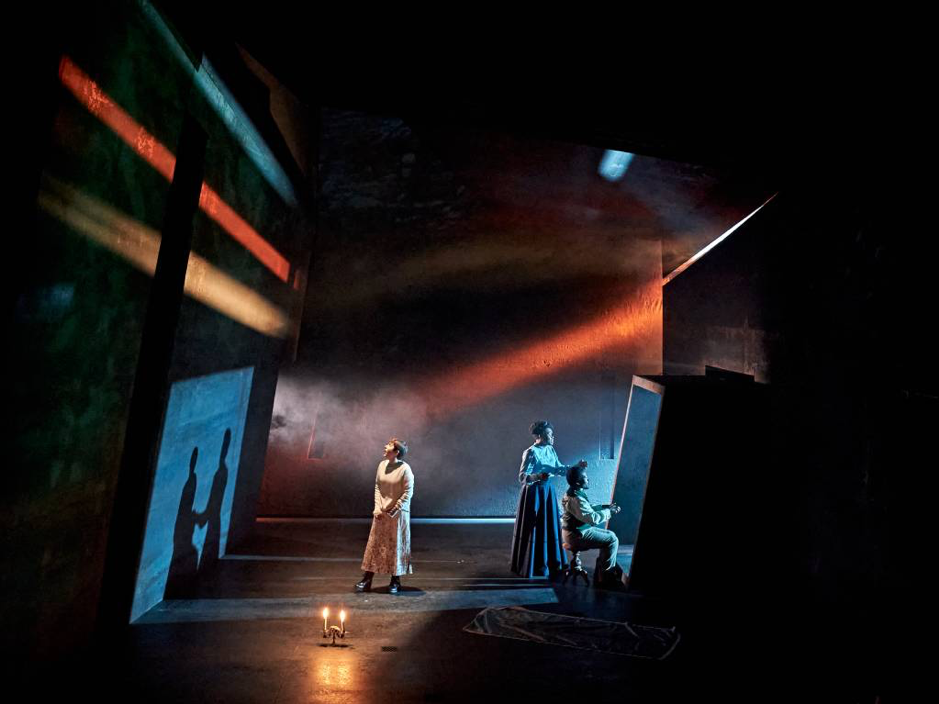 Sci-fi has taken over the stage at the Royal Court Theatre with a new play written by Alistair McDowall and directed by Vicky Featherstone, “The Glow”. Enigmatic powers and mystery flirt with psychology in this thrilling story, which acts as an open letter to humanity.

The story starts in 1863, in the darkness of an asylum. Suddenly, a light appears, held by Mrs. Lyall (Rakie Ayola), and reveals another person in the room: a young woman, apparently nameless and speechless (Ria Zmitrowicz), crouched on the floor. The spectator takes a while to understand the context of the situation, which will be a recurring aspect of storytelling throughout the play. We come to understand that Mrs. Lyall is a medium who uses people from mental institutions to communicate with spirits with the unwilling help of her son, Mason (Fisayo Akinade), and she has chosen the girl as her new vessel of communication with the underworld. The darkness of the mansion, the mystery surrounding the identity of the girl and the cartoonish villainy of Mrs. Lyall contribute to an atmosphere of uneasiness and fright typical of a horror film. The oppression and mystery are so great that the walls of the set literally close on the protagonist as she realises her situation.

The second act is distinctly different from the first, and as the mystery of the girl and her powers are slowly unveiled, we are suddenly transported outside of the oppressive closed doors of Mrs. Lyall’s mansion to travel through a myriad of different locations. We go from a story of captivity to a tale of travels, where Brooke (as her name is revealed to be) will meet curious new companions such as a bloodthirsty knight (Tadhg Murphy), an eccentric historian and an old nurse. Even those who are skeptical of the fantasy genre will enjoy the ride: the superpowers and supernatural are hardly the centre of the story, as the play focuses more on psychological themes of loneliness, pain and love for humanity. Alistair McDowall admits that he wanted to build a “fairytale where you feel the impact of the things that are happening “. We indeed witness all the suffering of Brooke, who is chained to what seems to be a curse more than a gift. What is the answer to her seemingly incurable suffering? The love of the few friends that she manages to make along the road, and her seemingly unconditional curiosity and affection for humanity despite everything is her only respite.

The otherworldliness and mystery of the story are enforced by the set design (Merle Hensel) and the lightwork (Jessica Hung Han Yun) – their creative use is the most striking aspect of the play. The stage is transformed into an uneven iron box that gives a feeling of a temporality that is essential to the plot. However, most of the elements of the plot such as the powers, the locations and the state of the character are communicated through a brilliant use of light design, as one could expect from a play called “The Glow”.

Expect to be thrilled, amused, terrified and overall touched by this fantastic yet extremely human story. Get your tickets at https://royalcourttheatre.com/whats-on/theglow/.