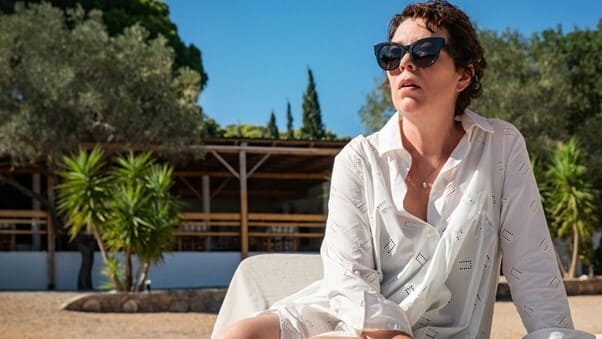 Maggie Gyllenhaal’s directorial debut ‘ ‘The Lost Daughter” creates a reflective, mournful and melancholic atmosphere against the backdrop of a picturesque Greek beach as actress Olivia Coleman gives us an unforgettable performance. Based on a novel of the same name, The Lost Daughter seeks to portray the sides of motherhood that are atypical and unconventional, the sides that are hidden and buried. Olivia Coleman plays Leda, a comparative English professor on holiday in Greece. As she is perched in her seat baking in the sun she crosses paths with a family also on holiday.  Amongst this family is Nina, played by Dakota Johnson, a young woman with a little daughter. Leda becomes infatuated with Nina and her daughter as she is reminded of the struggles of her early motherhood.

‘Children are a crushing responsibility’ is a very memorable line in the film. Leda mutters this to Nina whilst she grows frustrated at her daughter’s relentless cries, passing her to her sister in order to acquire a second of peace. It is often assumed that nurture is nature for women, motherhood is supposed to and will feel natural and that the birth of a child will arrive simultaneously with unconditional feelings of fondness, and love and care for these beings. The series of flashbacks to a young Leda, triggered by her interactions across the island, reveal the struggles of motherhood where nurture doesn’t feel natural and the seething exasperation, intense struggles and grievances of having young children seem to burn slightly stronger than the emotions of unconditional patience or nurture. These flashbacks begin when Leda joins a search to find Nina’s daughter as she disappears from the beach, eventually finding her, initiating the start of Nina and Leda’s friendship. The first flashback replicates a similar event, as we see a young Leda played by Jessie Buckley running across a beach, intense distress portrayed by a shaky handheld camera shot, as her daughter, Bianca has disappeared from within her sights. Once she finds her, Leda shows her relief with anger and annoyance at Bianca for running off. Many of these flashbacks present Leda as short-tempered, growing exceedingly unable to cope with the neediness and rambunctiousness of her young children whilst also having time to be her own person.

The triggers of Leda’s past are manifested in actions that are very haphazard and impulsive. She steals Nina’s daughter’s toy doll, and when asked if she has seen the doll, acts aloof despite hearing the amount of distress losing the doll has put the small girl in. In the confines of her villa bathroom, she caresses, hugs and strokes it as if it is a real-life baby. As a young mother, a young Leda is often presented as quite selfish, tending to put her needs before those of her children unlike what is typically expected of mothers. At the climax of being unable to cope, she makes the decision to leave her children, not returning for 3 years. When asked about what she remembers about her early motherhood, Leda repeatedly insists she does not remember, there is panic within her voice. Whilst describing leaving her children as one of the best periods of her life, there is also lingering guilt and regret that renders it difficult for her to be able to talk about this time, especially to another mother.

In the moments where we see Leda abandoning the needs of her kids, ignoring them as they cry for affection or snapping at them for being too boisterous and loud, we are conditioned to both resent her and feel empathy for her. It is clear that she was a young woman who felt suffocated by her surroundings, work, children and husband who was always out working and whilst this does not excuse the ways she treated her children, at some points we are not supposed to regard her as a bad person. The decision to leave her children and take time for herself was a result of her “exploding” she says. She does not present this decision as something she has done because she hates her kids, rather a necessary step in healing and taking time for herself.

The Lost Daughter is available to watch now on Netflix.