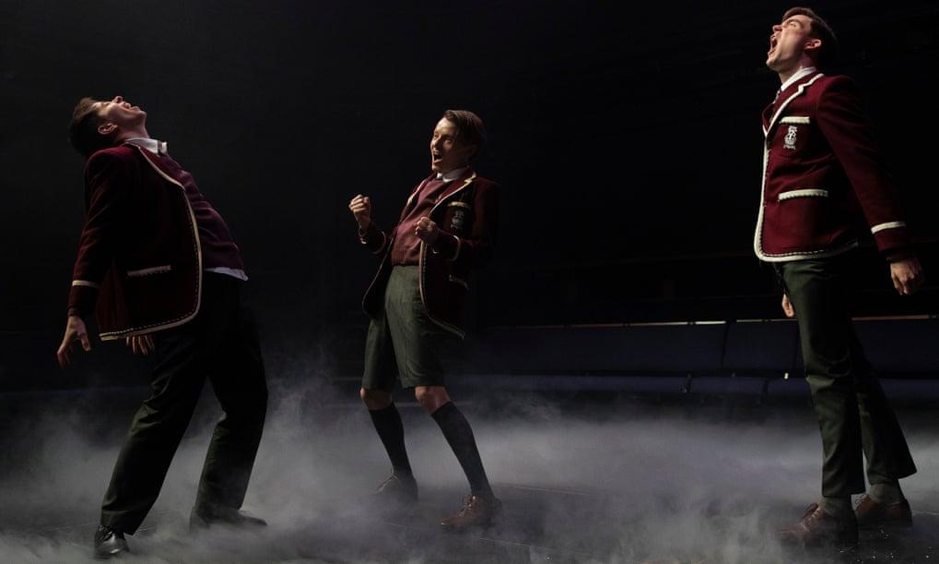 The Misfortune of the English – Orange Tree Theatre Review

As suggested by the title “The Misfortune of the English” written by Pamela Carter is a true story of misfortune, unfortunate tragedy and catastrophic disaster. In 1936, 27 English schoolboys embarked on a school trip through the Black Forest in prewar Nazi Germany led by their teacher Mr Keast. The story is told through the eyes of three young boys,  Lyons (played by Matthew Tennyson), Eaton (played by Vinnie Heaven)  and Harrison (played by Hubert Burton); they begin the journey full of the youthfulness, mischief and naivety typical of teenage boys. However, as the boys trudge through the black forest, the winds become stronger and the group becomes engulfed by the icy cold – warned by German locals that the path they walked upon was too dangerous and they should turn back, Mr Keasts ignores these warnings. Blinded by stubborn patriotism and ideas of masculinity, Mr Keasts is determined to continue along this path with the naive boys who follow him eagerly, guiding them upon the mulish premise that the supremacy of the English means they are powerful enough able to push through even the most deadly situation. However, these foolish notions of English exceptionalism are not enough to prevent the death and catastrophe that lies ahead.

The first half of the play is full of the vibrant, and playful energies of our three protagonists, fooling around and joking with one another, and proudly expressing their excitement to be representing their school and their country in the “foreign air” of Germany. By the second half of the play, this energy begins to fade from innocent and playful and turns to grave and solemn, at one point the boys sing “I’ll Stand by You” in an attempt to keep up spirits. However, pride, passion and patriotism are not enough to push through such a situation.   Pamela Carter makes evident the political connotations of the play, through the snide remarks towards Lyons, who is Jewish,  the passionate nature of the boys towards their school and country and the English exceptionalism that Mr Keats uses to encourage his boys. On the surface, the story seems to be merely about young innocent boys who looked up to a foolish and irresponsible teacher who led them towards their deaths, but more than that it is a story about imperialism and the faults of arrogant patriotism.

The set, score lighting for the play remains rather simple. Most of the play takes place on the plain stage, with the lighting dimming during the intervals where tourist information about the Black Forest plays. The focus is mainly on the performance and personalities of the three boys and how they develop throughout the events.

Pamela Carter was inspired to write the play through a Guardian article about the research of  Bernd Hainmuller, a historian who has written about the event. Carter has managed to create a play that greatly showcases the political implications of the event as well as the unfortunate and avoidable nature of the tragedy.

The Misfortune of the English is playing at Orange Tree Theatre until May 28. Tickets are available here: https://orangetreetheatre.co.uk/whats-on/the-misfortune-of-the-english/