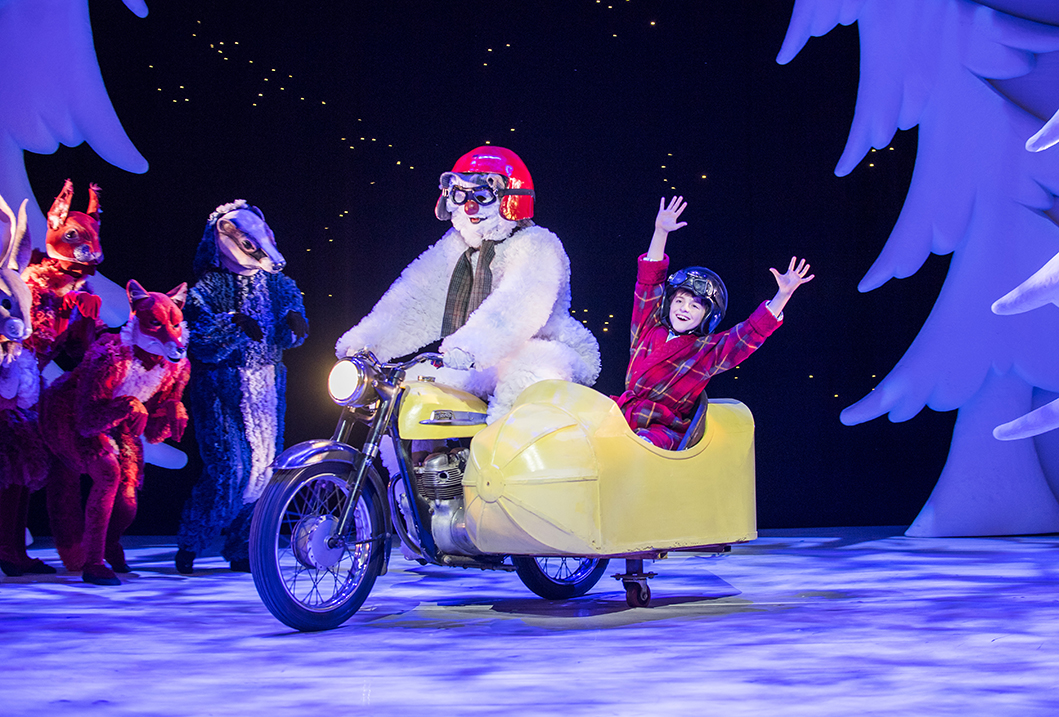 The Snowman is back at the Peacock Theatre on its annual run marking its 23rd year. A magical precursor to the festive season, it is a fantastic adaptation of the children’s book by Raymond Briggs and the film directed by Dianne Jackson. The show is a feast for both children and adults, who together can enjoy interacting with all the Christmas characters. Along with the little boy, there is, of course the Snowman with a whole bunch of other snowmen and snow-women, a very flamboyant Father Christmas in his glistening red attire, and there are penguins, reindeers and the snow princess. There are other animals like the cat, squirrel, badger, rabbit and fruits too, popping out of a gigantic refrigerator- all in their brightly coloured costumes, creating a bright and playful ambience. Everyone on stage is simply happy! They reflect pure joy, lifting the spirit and swooshing the audience off to a magical world where life is all sparkling and fun.

As the show is about to start the children in the auditorium drift into silence. From a quick glance around I could see a very eager young audience, almost counting down to the stage brightening up – 3,2,1-and the show begins! With its snow-covered Christmas trees standing tall on either side, the stage is a world covered in a white blanket of snow. The boy is still in bed, while Mum and Dad are busy with their daily chores in the living room. He wakes up to this beautiful snow-filled morning and goes out to play.  He makes his customary snowman who comes to life that night when the whole world is asleep. The boy sneaks out of his bed and goes out to check on his Snowman. Magically the Snowman comes to life. He takes a bow and shakes hands with him. The awe and wonder of the boy at this sudden surprise reflect on the junior members in the audience! The boy and the snowman bond and the journey of experiencing each other’s worlds begin. Martin Fenton’s performance as the Snowman is eerily like that of a snowman. His movements mimic the soft weightless glide of an actual ball of snow. They are frictionless with no sign of conscious effort.

Throughout the first half of the show, the boy takes the Snowman around his house where he is amazed at his discoveries in a human household. The Snowman’s explorations have been wonderfully portrayed through the choreographies and theatrical elements of the show. The humour in the story is perfectly wrapped in choreographic sequences when the audience cracks into laughter – the Snowman lazes on the sofa next to a fireplace and he almost begins to melt. The boy rushes to switch it off and restores the Snowman back to shape. The boy leads him in front of the kitchen fridge. Opening it brings a cool breeze of relief for the Snowman and out comes a giant banana, coconut and pineapple. The dance of the three fruits is one of the highlights of the evening. The Snowman meets the household pet cat and ends up ruffling him out of his cosy corner.  He then goes on to ride a motorbike with the boy seated on the side carrier. This untimely night ride drives out a squirrel, a fox and a rabbit from their slumber. This leads to another memorable dance sequence under a starlit night sky.

Ready for a rest after their exploration, the Snowman gets in the freezer -and what happens now is jaw-dropping for our little spectators. The snowman starts to fly! And he also whisks James with him, finally landing in the North Pole! A real flight across the stage – can it really get any more magical! The children follow the gentle, dreamy take-off without a blink. The very little ones arch and drop their heads back, almost touching the roof with their chin. There is a unified gasp across the house and waving of hands at the Snowman and his little friend. The Snowman introduces his friend to his other snowmen and snow-women friends who have gathered from around the world to party. Guess who is also at the party- Father Christmas himself! There is a cheer from the audience as he enters in his sledge. Beautiful dance sequences unfurl in this section as there are more characters adding in, typical to the land of Father Christmas. The reindeers, penguins, the Snow Princess and the wicked Jack Frost. What ensues is a fun-filled second half with more dance numbers, mime and drama to the original score by Howard Blake.

Birmingham Repertory Theatre’s recreation of The Snowman is a beautiful translation of the book into this stage presentation. The format is simple yet catching. Very colourful and bright, even when it’s all white. The use of bright colours, crisp direction, flawless performance by the cast and the magical bond between the snowman and his little friend, together, creates the ideal treat for all in the build-up to Christmas. The snowfall on the audience at the end when James is tucked back in bed by his buddy, adds in a winter wonderland feel to the show. He wakes up the next morning only to find his Snowman is all but melted, leaving behind his hat and scarf lying on the snow. Our young audience would have been sad at this ending but there is the finale dance to cheer all up. The entire cast gushes in on stage along with the Snowman and the boy and Father Christmas. They dance under the light shower of snowflakes. It’s a party! It’s a joyous festive finish to the show sending smiling faces back home!!