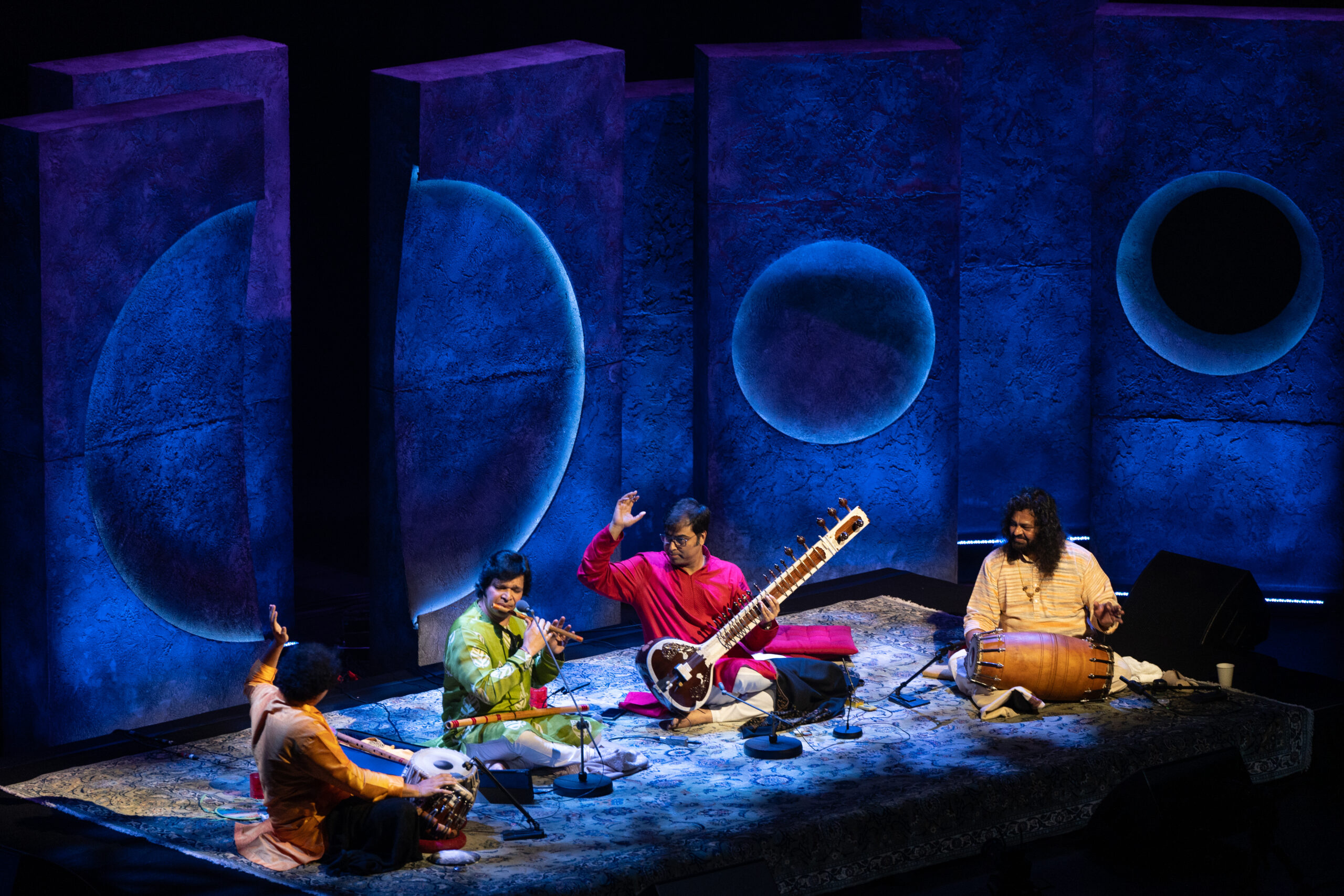 The alaap in Indian classical music is similar to the prelude in western classical music. It can be long but it extends a meditative calm as the artist slowly builds their interpretation of the mood of the raga (melodic framework for improvisation in classical Indian music) and prepares the audience for a journey into a personal musicscape. Each raga is one of the possible and aurally pleasing specific combination of seven notes but the Indian system leaves room for the artists personal and impromptu improvisation. This insightful parallel between the alaap and the prelude was drawn in the opening remarks on the final evening of Darbar festival by Benedetta Pinelli – the executive producer of Sky Arts- an organisation which has done so much in supporting and promoting this carnival of pure music over the last few years.

The big difference between the Indian and the western music system is the lack of notation in the former and the freedom to improvise. It’s a heritage that allows the artists a calculated and precise freedom to express themselves. The Darbar festival which is in its 17th year had been instrumental in introducing western audiences including the Indian diaspora to the nuances of this ancient classical tradition. In the process it has evolved to become the big benchmark of Indian classical music, launching the careers of numerous artists. What started as a tribute to much respected tabla teacher and educationist Bhai Gurmit Singh Virdee, has now morphed onto the definitive high watermark in the Indian music season, in the same way as Dover Lane or Sangeet Natak Academy did in the Indian scene.

The final evening in this year’s showcase opened with a short statement from founder Sandeep Virdee whose single-minded devotion to the cause of music has awakened a full generation of audiences to the sublime beauty and precision of an ancient musical tradition. Unlike the political affiliations or paid media connections that can often bedevil similar initiatives in the home country, for the Darbar festival only quality and talent serve as the criterion for the showcase. In this year’s line-up for example, in addition to established maestros such as Shubha Mudgal and Purbayan Chatterjee, we also had young masters such as the Wahane sisters, Sanskrati (sitar) and Prakrati (santoor) who performed on their first international tour at Darbar this year and another child prodigy who has developed into one of India’s finest tabla talents, Yashwant Vaishnava, electrified the audience with their performances

The first half of the double bill started with the quartet of Purbayan Chatterjee on sitar, Rakesh Chaurasia on flute, Satyajit Talwalkar and Patri Satish Kumar on the percussion instruments of Tabla and Mridangam respectively. Chaurasia opened with a languid evocation of the raga Behag with Kumar chiming in with his rhythmic beating of the mridangam. Kumar would later demonstrate why Virdee advised seat belts for the audience in his opening speech. Chaurasia’s flute soared and lifted the audience into a realm of flowing streams and blossoming flowers. Kumar’s mridangam beat a cosmic rhythm offering glimpses to experiences of other realities. Chatterjee joined in with his immaculate mastery of the sitar strings, expanding on the themes floated by the flute, often combining with a dexterous expression of beat cycles and note interpretations. Talwalkar’s tabla recited the sequences with electrifying flourish sometimes rising to a frenzied crescendo. At other times slowing down in playful exchange with the other artists. The quartet moved on to raga Desh and concluded their performance with some melodious Pahari compositions.

The second half opened with a vilambit (slow tempo) alaap on raga Chayanat by renowned vocalist Shubha Mudgal. The bandish (fixed melodic composition) for the vilambit is a traditional one with an unknown composer, one which has been sung for several centuries. She then moved onto a drut (fast tempo) with a bandish composed by her late guru pandit Ramashray Jha. The maestro with the luminous voice is at the zenith of her skills. The clarity of the aarohan (ascending scale of notes) in her exposition of the Chayanat is pure and can be compared to an auspicious offering to the gods.

As the magical evening drew to a close it was clear that the Darbar festival has succeeded in immersing its audiences in pure musical bliss and enriched their understanding of the sublime beauty and rigorous discipline of the classical Indian tradition. True to its word the Darbar festival this year has been thrilling, inspirational and soul stirring.