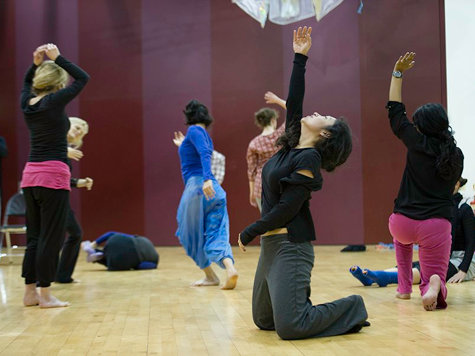 It is a rare opportunity for dancers to be tutored in a particular technique by more than one choreographer in a day’s workshop. Unlocking Creativity 5 created a platform for its participants where they were led by two of UK’s dynamic contemporary choreographers  – Kali Chandrasegaram and Kalpana Raghuraman and the iconic choreographer and pioneer of South Asian Contemporary Dance – Shobana Jeyasingh. Held on the 28th April at the Luton Carnival Centre and the Hat Factory as a two part session, Unlocking Creativity provided dancers and budding choreographers a goody bag of useful ingredients for making dance, using the  Contemporary Dance technique.

The morning session led by Kali Chandrasegaram and Kalpana Raghuraman transformed the floor into a space where the dancers were challenged to make an inward journey exploring their deepest emotions and gradually transforming them into movements. It was as if the movements were naturally oozing out of their bodies as an effortless yet powerful dance metaphor. The use of space in the resulting choreographies was particularly striking, taking the session to a higher creative plane. The other aspect of the morning session was the interplay of the dance pieces with the music. The music sometimes served as a counterpoint to the movements bringing in variations in their creation. The final exercise for this half was exploring the use of props in dance making. The focus was in their effective and clever use along with movement and music to bring an edge to the dance. The props introduced a sharpness and sometimes even a wild fierceness to the pieces. The brilliant music accompaniment by Jesse Bannister aided and inspired the dancers creativity. His music blended in and faded out where needed almost giving a pre-rehearsed air to the session.

The second half of the day brought in noted danseuse Shobana Jeyasingh whose name is synonymous with the genre now referred to as South Asian Contemporary dance in the UK. It was a privilege for the participants to have guidelines, suggestions and what I would call the magic ingredients from Shobana to create a stage worthy dance composition. Participants were shown how the use of timing, proximity,levels,entrance and exit can be effectively used in choreographing a group dance piece. This insight into good contemporary dance making is what the participants were there for. Shobana had very generously passed that on for the dancers to  assimilate and execute in their own creations.

At the end of the session there was a panel of questions to the choreographers by Sanjeevini Dutta, the editor of Pulse magazine and artistic director of Kadam -Asian dance and music – the life force behind organising Unlocking Creativity. A very informative exchange of thoughts and information took place leading to the understanding and practise of contemporary dance in today’s world. How it is perceived, conceived, delivered and accepted by the performers and their audience.

Unlocking Creativity, as the name suggests has liberated not only new movements but also opened up an intriguing dialogue between classical and contemporary, their interdependence as well as their uniqueness. More of such sessions is what dancers of all genres will look forward to. Kadam has shown once again that it is unparalleled in connecting Asian dance and music communities. We hope that in the future kadam will continue to be the platform bringing in more opportunities for creative exchange such as this.