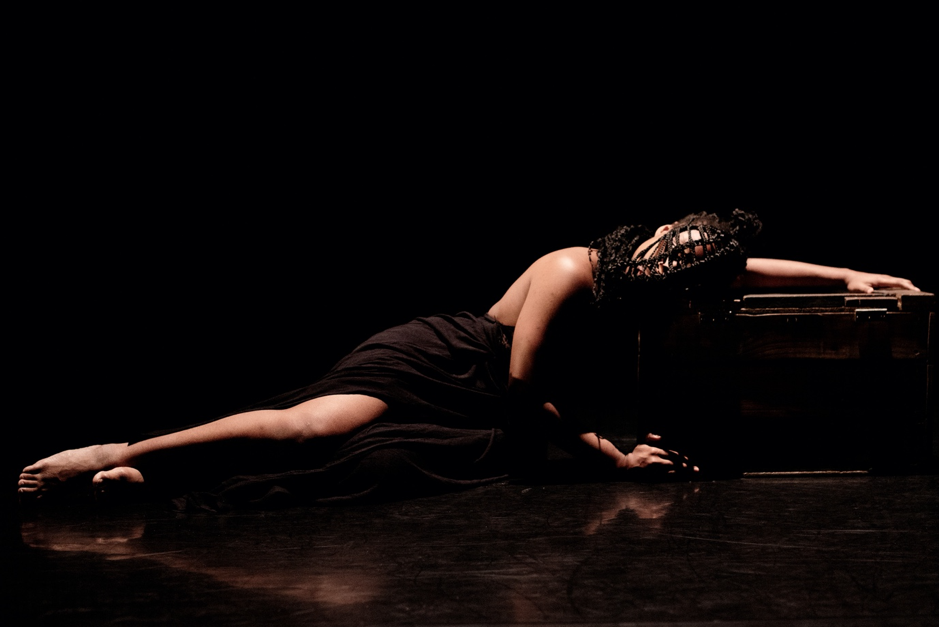 Sadler’s Wells “Wild Card” gives young  and upcoming artists the opportunity to design their own night and share their voices. On January 20th, the stage was given to Akeim Toussaint Buck for his Wild Card “Radical Visions”. The event contained two live dance performances, a premiere of Toussaint’s short film “Displacement” and a final shared experience of dance and spiritualism. An evening of dance that explored the realities of social inequality and identity crisis faced by immigrant communities in England, all within a universe of creativity and celebration of cultures.

The show opened on Alethia Antonia’s solo “Inscribed in ‘Me’”, a  mesmerising performance filled with intimacy and passion that explored the themes of trauma and identity. This loss and search for identity were reflected in every aspect of the choreography, from the changes and cuts in the music to the portrayed hesitations and variations of the style of dancing to the powerful acapella singing performance. The most blatant aspect of identity remains the change of costumes: initially, the dancer was adorned with a regal black fishnet costume that went all the way up to her face like a muzzle, a majestic yet terrifying costume that she subsequently replaced with modern plain clothes found in a mysterious box filled with clothes. The dance revolved mostly around that object, as the woman seems tormented yet curious about this box of Pandora, of which she ended up frantically throwing around all the clothes before the stage faded to black.

The second dance “Black Is…” was put on stage in the quartet of the studio Fubunation in a rhythmical and collective dance choreographed by Rhys Dennis and Waddah Sinada. The four dancers performed in perfect unison and acted as a unique living entity with some instances of interaction where they would support and push forward each other with mellifluous movements. However at instances, the collective spell would suddenly break, and a single dancer would wake up from this shared trance and stop dancing in a timid revolt and discovery of their individuality. Their awakening wouldn’t last long, and they would suddenly fall back in the fluid and balanced flow of the collective dance.

The second act of the evening was a screening of Toussaint Buck’s short film “Displaced” which cinematically reinterpreted his dance solo “Windows of Displacement”. The film beautifully blended cinematography, dance and spoken word to convey an extremely powerful message of race, identity, power and hopefulness. A sort of personal manifesto from Buck that drew from his personal relationship to dance, his Jamaican origins, his experience in the United Kingdom and his life philosophy. A personal and intimate journal, yet extremely universal as it told the story of the reality of the thousands of marginalised lives that still exist today. The scenes where Toussaint dances on the beach (they were not Jamaican beaches) in a majestic white costume are intertwined with scenes of public settings such as a supermarket, a laundrette or a playground. The adjacency of the two universes shows the nostalgic contrast of the freedom of movement and expression in the large Jamaican tundra and the confined restraint and gloom of the city, whilst also representing the dancer’s clashing national identities. Overall, the goal of the movie is to sensitise it’s viewers through the act of sharing their hope, culture and zest for life.

In an age where political parties are as divergent as ever on the questions of immigration, Toussaint’s “radical visions” offer an alternative: communion instead of division. Sharing a culture instead of carrying on the mentality of division and marginalisation that is currently predominant, all through the beautiful and universal medium of dance.

Check out the next upcoming show at Sadler Wells at https://www.sadlerswells.com/whats-on/.

Akeim Toussaint Buck is an interdisciplinary performer and maker, born in Jamaica and raised in England. Akeim’s intention is to create moving, thought-provoking, accessible and free-spirited projects. The work challenges, enlightens and entertains in a visceral way, calling on multiple art forms to tell the story. Audiences are invited to not just observe: they are implicit in the experience. His work aims to reflect on reality, looking at ongoing socio-political issues, with a humanitarian intention.

Since graduating from the Northern School of Contemporary Dance with a Bachelor’s degree in Performing Arts, Akeim has been involved in multiple cross-disciplinary programmes with a wide range of artists and communities from around the world. The aesthetic of his work combines: dance, creative writing, film, poetry, beat-box, singing and acting. Fused to tell stories capable of bridging the gaps between a variety of audiences.

Akeim’s movement interest has a myriad of inspirations, from Capoeira, Kick Boxing, Contemporary Dance, Contact Improvisation, Caribbean Dance, Hip Hop, Yoga and Release Technique to name a few. His performance focus expands from the physical to vocal expression. Building on an interest in the voice’s expressive qualities, with current explorations of beatboxing and vocal improvisation.

Recent achievements include becoming Irie Dance Theatre’s, Artist in Residence for 2019-2020, becoming the Artist for Northern School of Contemporary Dance, Yorkshire Dance and Spin Arts’ Catapult 2019. Thanks to Deda Theatre in Derby where Akeim has been recently appointed Associate Artist 2020-2021, gaining more support in his work. Thanks to Geraldine Connor Foundation where Akeim is an Associate Artist. Attaining a Seed Commission for piloting Beatmotion Mass for Leeds Year of Culture 2023.