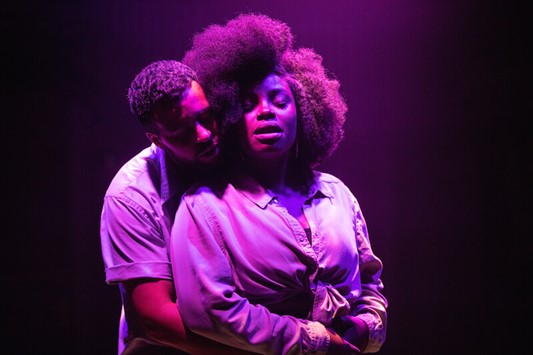 Yellowman directed by Diane Page and originally written by Dael Orlandersmith, maintains its relevance in a modern-day context, as it did when it was first adapted into a play in 2004. Set in South Carolina the story portrays how colourism prevalent within the communities, particularly within South Carolina, negatively impacted the lives of the darker skinned individuals such as the protagonist Alma (Played by Nadine Higgin). The “Yellowman”, lighter skinned Eugene (Played by Aaron Anthony) falls in love with Alma, and despite the prejudices in the society that they have been exposed to, they are adamant on being together. Yellowman essentially highlights how white supremacy has affected the black community internally, causing ostracism and discrimination from within a community where there should be togetherness.

From a young age Alma’s mother instilled her own hatred for her darker skin into her daughter, causing Alma to develop deep insecurities. She believes no man would ever love her, as she is too “dark and big.” Higgins perfectly portrays a burning emotion of tearing out of the skin that society says is ugly and unlovable and getting rid of an insecurity which plagues Alma’s life. Eugene and Alma meet as kids and become inseparable, gradually evolving from childhood playmates to teenage lovers, deeply and emotionally involved. The play highlights a theme of coming-of-age. Together the two learn to unlearn the social conditioning that has been imposed upon them by their families and the wider society.

With a minimalistic and rather bare set, the staging of the play is kept simple. What stands out is the raw energy of the actors with a realistic appeal. Both the powerful script and acting convey a range of emotions needed to connect with the story and its characters. The story combines lighter scenes of fun and carefree moments of growing up, as well as the deeper and thought-provoking moments of realisation, melancholy, and heartbreak.

Despite the fun moments in scenes where Alma and Eugene are seen hitting a cocktail bar together or are entwined in a loving embrace in their intimate moment of passion, ‘Yelloman’ is essentially a play of heartbreak and agony. What filters through, is two people in love, struggling to escape a generational trauma are trying their best to exist in a world that has told one of them, you are lesser or different! The second half of the play is a dramatic and poignant portrayal of this underpinning theme, ending in a crushing yet poetic climax.

Reviewed by Lian Lakhope. Lian is a MA Global Media and Communications student at SOAS and a volunteer writer for Abundant Art. Lian has written for several different publications, mostly about music, culture and film and she is enthusiastic about expressing her passion for creating art and media.