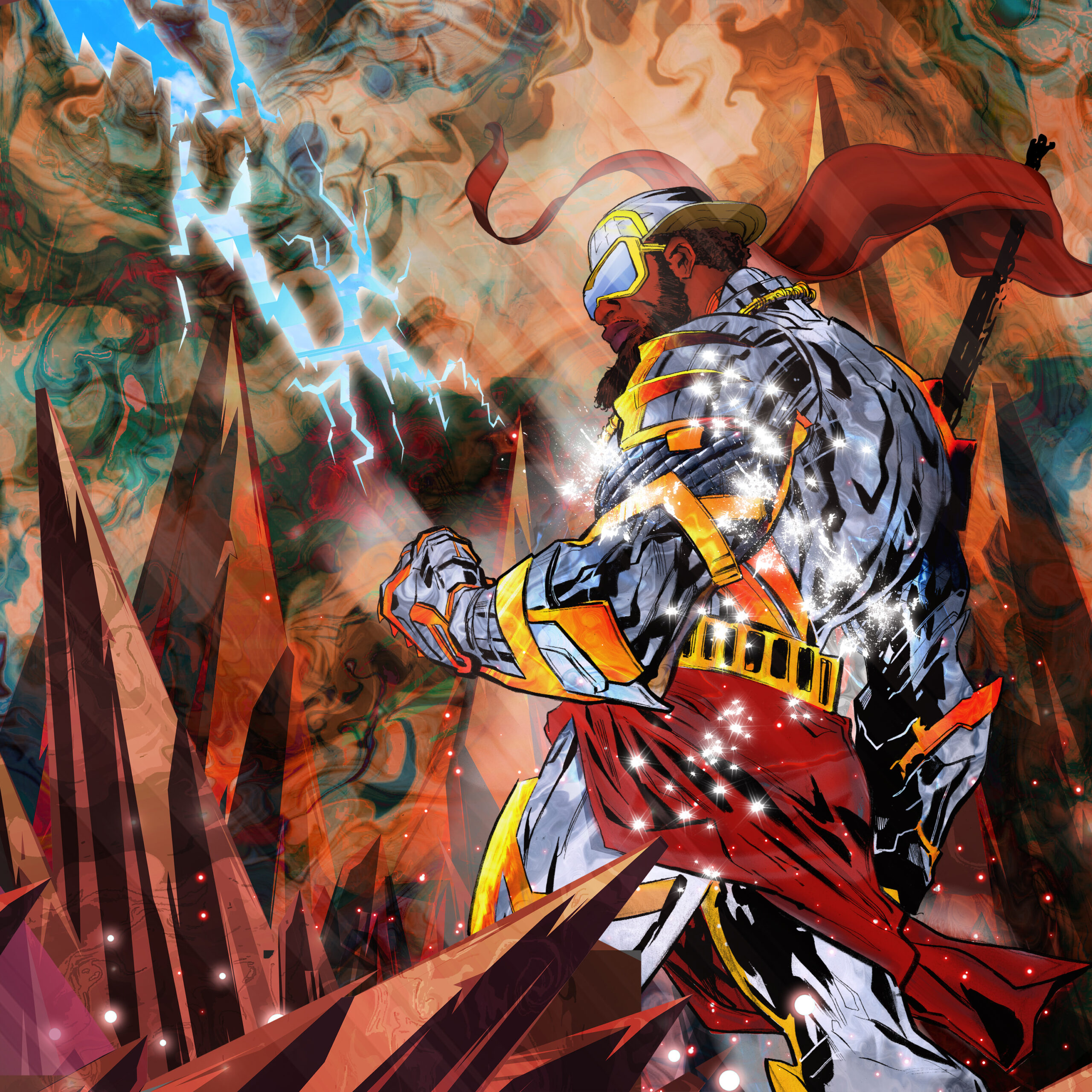 OCTOBER FEATURE: Brinson: Before He Cracks The Sky and 10 Things Every Christian Hip Hop Artist Should Know

I would not call myself an expert in self-help books, but Brinson Wright’s 10 Things Every Christian Hip Hop Artist Should Know is a highly specialised illustration of their common features. I am not an aspiring Christian rapper either, but there is serious value in Brinson’s counsel, no matter your goals. Coming in at fewer than 40 pages, Brinson wastes not a single word in his book. It is split into 10 chapters; each chapter is a rule for finding success as a Christian rapper.

Earlier this year, I received a copy of Manifest: 7 Steps to Living Your Best Life by Roxie Nafousi. It’s a bright orange hardback with minimal artwork, big line spacing, and thick paper; it’s nice to hold, to feel, and to look at. Perfect to be left on a coffee table or as a spot of colour on a bookshelf – and never to be read.

Part of selling a self-help book is knowing your audience. I have no concrete basis for this claim, but I believe these books are less about the exhortations themselves than about our personal dialogues with the words and how we see ourselves as congruous with or aspiring to the author. For example, Jordan Peterson’s 12 Rules For Life – drivel though it may be – is invariably seen in the hands of metaphorically lost, doe-eyed young men. Yet they are drawn to Peterson’s belief that the waning of masculinity in society is responsible for its apparent decline. Ironically, these boys have little in the way of masculinity themselves, toxic or otherwise.

Nafousi’s book, on the other hand, speaks to a millennial consumership. Minimal and aesthetically pleasing, one not only wants to be reading it, but to be seen reading it. Nafousi relates to this reader from the off: she returns to London after a month of yoga somewhere in Asia only to slip into the old habits of smoking and drinking too much; she filters manifestation through the language of vague spirituality – never religion – with terms like ‘the Universe’, ‘abundance’, and ‘vibrations’. It’s for the kind of person who visualises themself as being or becoming that kind of person.

Anyone who’s experienced or researched Cognitive Behavioural Therapy (CBT) may recognise many of the nuggets of wisdom given by Nafousi and others. (Peterson’s rules are more poorly connected ramblings.) Be grateful, set SMART goals, work consistently, be patient, and have faith that what you want will happen – realign your cognition, realign your behaviour. We are far more receptive to these ideas when they are set out in terms and by a voice which reflect your own values.

Brinson, like Nafousi and others, refracts many reliable precepts, but through the hyper-specific world of Christian hip hop. ‘Guard your heart’ and ‘You gotta work’ are two exemplary chapter titles which fit into the CBT–self-help guidance matrix. But the most curious part is Brinson’s negotiation between personal success and ministerial success. He frequently refers to ‘your ministry’ – i.e. your personal religious practice and evangelism. Even though one of his rules is that your career should be ‘all about the people’, hustle culture and individualism are woven into the fabric of 10 Things, in all its Americanness.

Although the lexicon of ‘the Universe’ alongside advice like ‘wake up earlier’ made me want to vomit, I recognised the value in Manifest. Likewise, Brinson calls for unwavering faith in the power of God to deliver what you need. Nafousi filled her book with afffirmations, increasingly popular phrases you repeat to yourself to reframe your self-image; 10 Things has a prayer at the end of each chapter. But what rings throughout all effective self-help books is faith.

Testament to the efficacy of 10 Things is my strengthened resolve after finishing it in one (albeit not that long) sitting. Brinson’s book sits at the intersection of self-help, motivational speaking, and gospel preaching – three practices deeply embedded in black American culture. The only thing that makes the book seem strange is the relatively esoteric focus on Christian hip hop. This cultural gap was most apparent in some moments that read almost like satire: ‘[Jesus had to] get his miracle flow up, and THEN he went into the ministry. Jesus was 30 years old before he went on tour, so don’t be too hard on yourself.’; ‘imagine a new rapper named D’Maskus who just finished up his album. Next, we have a guy named Fresh Praise Dude (FPD), who is signed to a big Christian rap label.’

One of my favourite things about 10 Things is that it is good advice from someone who is in the Christian hip hop grind. Peterson’s first rule for life, for example, which encourages you to be dominant and accept the hardships life throws at you, horribly backfired when he was admitted to a Russian medical centre in 2020 for benzodiazepine addiction. And as far as I can tell, most of Nafousi’s huge success is from her manifestation guidance – I’m not convinced that her book will help me become either a more successful teacher or a better culture writer.

Full disclosure: Before He Cracks The Sky, Brinson’s latest album, was my first brush with Christian hip hop. His far-reaching stylistic range is one of the first things I noticed about it – second only to the quite unusual ‘God chaserz baby!’ producer tag at the beginning of most of the tracks. The second song, ‘Flowers From Da South’, wouldn’t sound out of place on an early Drake album; the following track, ‘O.M.S.’, showcased heavily autotuned vocals and quasi-Pi’erre Bourne production. Virtually all the songs are in the ‘hustler hip hop’ vein, with lyrics about working hard, surviving hardships, and reflecting on struggles and successes. Some match the unintentional comedy of the book, like ‘Comment Section’, when the internet troll realises he’s been blocked at the end of the song.

In both his songs and writing, Brinson is concerned with the duality of secular and religious music. Since the blues guitarist Robert Johnson was reported to have sold his soul to the devil in return for musical success, the divide between the two in American contemporary music – especially in black communities – has been a strong one. (The same divide was apparent in the gulf between gospel and soul in the 60s and 70s.) But no matter how odd Brinson’s world may seem to us in a Britain where religious congregation plays a much smaller role, the religious–secular duality is a continuation of an American music tradition that lays the foundations of millions of lives across the pond.

Image: Before He Cracks The Sky, album cover

Before He Cracks The Sky | Brinson (bandcamp.com)

Brinson’s passions for youth ministry are backed by over a decade of experience and training as an ordained minister and studies in the renowned Music Business Program at Belmont University in Nashville, TN. He is a 2011 graduate of the SOMET Ministry School, has traveled and performed his music and ministering the word of God on international stages, and was recognized as an Honoree at Atlanta’s Holy Hip Hop Awards. It all led to his founding of GodChaserz Entertainment (GCE) which has since released over 20 Christ-centered hip hop albums by a roster of artists designed to inspire, uplift, and entertain. The works of Brinson and his GCE family have been covered by various media outlets including ESPN.com, NPR, MTV, Jacksonville Magazine, JamTheHype.com, Trackstarz.com, RapReviews.com, The Houston Chronicle, The Wade-O Radio Show and the GodChaserz Podcast.

About ‘10 Things Every Christian Hip Hop Artist Should Know’

Regardless of your specialty in the music industry, this book is an indispensable resource. Readers new to the business of Christian hip hop and seasoned ministry professionals alike will find Brinson’s handbook to be a practical guide for navigating the complex world of music and ministry. This text is ideal for introducing concepts such as an introduction to Christian hip hop, general music business, as well as more focused thoughts on the heart of ministry. 10 Things Every Christian Hip Hop Artist Should Know includes coverage of key topics such as promoting online, marketing, creating multiple income streams, and the entrepreneurial mindset required for success. Uniquely, it also provides direction on conducting business without compromising the Gospel and prayers geared toward guarding your heart while in music ministry.

Roxie Nafousi is a self-development coach, manifesting expert, author, ambassador for the Mental Health Foundation and Instagram Agony Aunt. Her commitment to transforming the lives of people who suffer with emotional and mental health issues, and helping them to fulfil their potential, has seen her become a well-known figure in the wellness world. She has hosted self love and motivational workshops.

About Manifest: 7 Steps to Living Your Best Life

MANIFEST is the essential guide for anyone and everyone wanting to feel more empowered in their lives. Self-development coach and ‘Queen of Manifesting’ Roxie Nafousi will show you how in just seven simple steps you can understand the true art of manifestation and learn how to create the life you have always dreamed of.