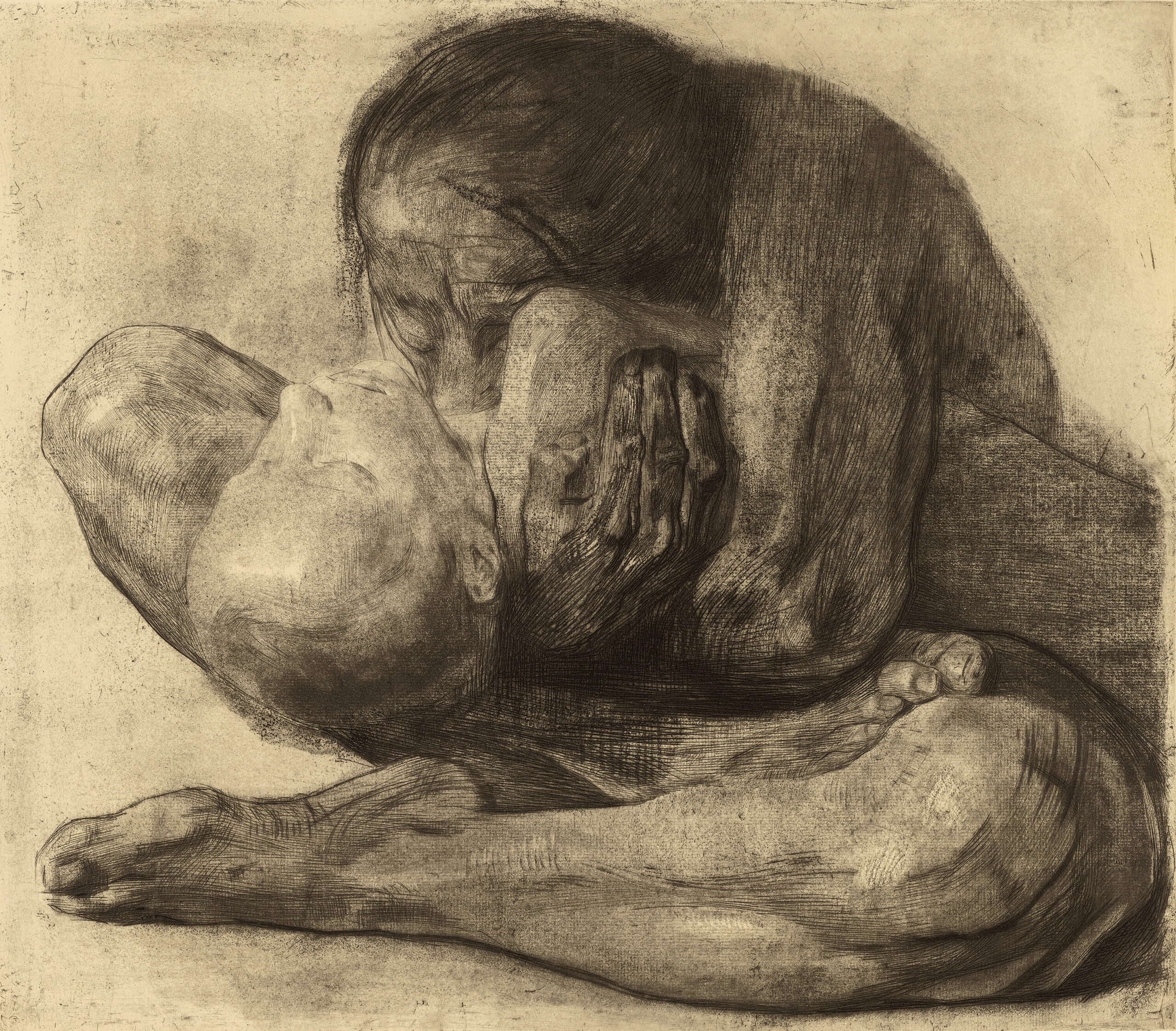 Review: Making Modernism at the RA-Covers a range of emotions and themes from four phenomenal women artists of the 20th century-ends 12th February

Making Modernism at the Royal Academy of Arts brings together a varied collection of 68 works which together feature a wide range of themes, styles and visual languages. Each of the main four artists included in this exhibition – Paula Modersohn-Becker, Käthe Kollwitz, Gabriele Münter and Marianne Werefkin, have strikingly different and distinctive styles despite the fact that they all engaged, to differing extents, with Expressionism in Germany in the early twentieth century. Modersohn-Becker, in my opinion, provides the most radical and iconic imagery of the exhibition, possessing such a memorable and unique way of making pictures and painting figures – most notably herself.

The exhibition has clearly had a hard task of bringing together the 68 works and the four main artists into a selection of coherent narratives and themes. Indeed, it is hard not to feel that the themes provided for each room (of which there were only three) were too broad for the works themselves. The themes were: Ourselves and Others, The Century of the Child, Intimacy, City, Town and Country, and ‘Still Lives’. The actual paintings (and the one beautiful sculpture by Kollwitz) were surprising, shocking, agonising, sensual and intriguing, but the frameworks provided for interpretation were not particularly helpful, primarily because of their vagueness as they attempted to cover large themes across time and the biographies of all four individuals at once.

The self-portraits in the first room were brilliant. Kollwitz’s self-portrait from 1889, produced in ink, was incredibly captivating both because of how self-assured Kollwitz looks, and because of the striking contrast between the fine, agitated lines on her face (presumably done with pen) and the smooth washes of ink used to draw her body (presumably done with a brush). Modersohn-Becker’s self-portrait with lemon, 1906-7, is concise both in its size and in its vision: the work is narrow, small and cropped, with a focus on the face and Modersohn-Becker’s one hand, which holds the lemon. One of the points of genius in this work is its use of colour. The colours are warm and harmonious, and yet the surface bursts with surprising layers and contrasts, one example of which is the combination of ochre and bright blue used to form the iconically large eyes.

One of the most brilliant characteristics of Modersohn-Becker’s works is their quality of mystery. In her self-portrait from 1906-7, the mystery lies in the presentation of a lemon as if it were a trophy, the darker shade of bruised purple used for the face, which jarringly contrasts with the pale tone of the body, and the diverted eyes, which make you want to find out what is being looked at.

Münter’s Self-portrait from 1908 isn’t the most confident of the self-portraits on display, but in terms of paint, I found it the most exciting.  The work is painted loosely on cardboard in an endless array of somehow miraculously harmonious colours. Thick and vigorous brush marks don’t distract from how tender and searching the eyes are, but instead add to the mood of intense longing and inquisition.

The set of interiors which followed were beautiful, intimate and featured some of my favourite works in the exhibition. Werefkin’s interior featuring two men leaning on either side of a fireplace is both comical and beautiful. The lines and brush marks in the painting are delicate and loose, and though a painting, the whole scene has a graphic, story-telling quality as if a satirical comic in a newspaper. As the exhibition went on, it was evident that this humour and irony could be found in all of Wereffkin’s works, which was a nice contrast to the profound themes of grief and suffering in Kollwitz’s works.

Münter ’s interior scenes were reminiscent of the lives of the Bloomsbury set – paintings featuring socialising paired with intellectual conversation in pleasant (domestic) settings. Münter ’s Kandinsky at the Table (sketch), from 1911, was one of my favourite works because of its abstract nature and the focus on colour and simplified forms, which locates it firmly in the territory of modernism.

The next room focused on the motif of mother and child. This room felt profound, emotive and genuinely moving, not least because of Kollwitz’s portrayal of a mother clinging to a dead child. Indeed, the seriousness of Kollwitz’s inquiry into human suffering is hard to absorb, since the emotion in her works is so raw and unflinching. Kollwitz’s Head of a Child in its Mother’s Hands, 1900, drawn in pencil, is exquisite. This room was particularly important as it represented female subjectivity within the narrative of Modernism.

The final room was the least effective and engaging for me. The theme City, Town and Country felt redundant, and the works were all so different that it felt a bit like the leftovers had all been put together in one gallery. One artist, however, stood out. Werefkin’s highly saturated paintings of towns, mountains and imaginary, symbolic landscapes burst with vivid colours and often had a hallucinatory quality, whilst also appearing isolated and slightly haunted. Two beautiful sketchbook pages of Marianne Werefin’s are displayed, but there is otherwise a lack of supporting ephemera, more of which could have enriched what was a fascinating but fairly small and minimal exhibition. These works together brush the surface of women who were making modernism in the early twentieth century. I can only imagine how incredible it would be to have exhibitions dedicated to each of these phenomenal artists individually.

Lucy’s passion for the arts began with drawing and painting at a young age and developed later on into a love of landscape painting and a degree in Art History, with a focus on Modernism and gender. Lucy has grown to love literature and acting in particular, and her experiences acting at the Edinburgh Fringe Festival have been formative, convincing her that performance can be an essential tool for communication and connection, as well as of course being a valuable source of entertainment.