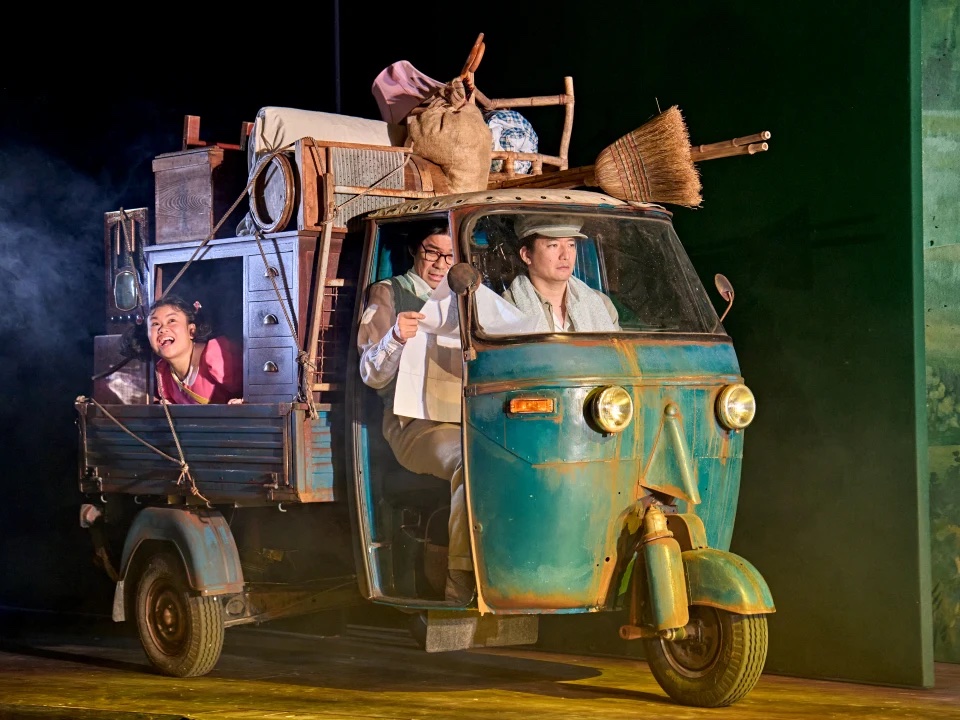 The original film of My Neighbour Totoro comes from the celebrated animation house Studio Ghibli, who have produced 24 feature length films including Spirited Away (2001), Howl’s Moving Castle (2004) and Princess Mononoke (1997). Studio Ghibli’s animations are well-loved and consistently top grossing, so it is no surprise this play adaptation has beaten Barbican box office records.

My Neighbour Totoro tells the story of a family who move to the countryside in post-war Japan. After their mother falls ill and is confined to hospital, sisters Satsuki and Mei busy themselves with adventures in the nearby forest, meeting mystical creatures along the way. The bittersweet tale demonstrates the transformative power of family, friendship and most of all, imagination.

Ami Okumura Jones (Satsuki) and Mei Mac (Mei) both play children, despite them being adults. On occasion the exaggerated childlike actions feel a little excessive, even irritating. But as the play develops, the actors settle into the roles and this becomes less jarring. They both deliver good performances, however, the real stars of the show are the puppets. We see dancing Susuwatari (dust spirits), a friendly Totoro and an illuminated Cat Bus – the latter two, both so large it almost feels impossible they fit on stage at all. On multiple occasions, their appearances prompt gasps of wonderment from children and adults alike in the audience.

The production, written by Tom Morton-Smith and produced by The Royal Shakespeare Company tells the popular story in a new light, however the magic undoubtedly remains. Music by Joe Hisaishi, who also composed the original film score, flows perfectly throughout. Perhaps even more special, it is performed by instrumentalists on platforms in the treetops on stage – one of the many elements of Tom Pye’s fantastic production design. Although the band remains throughout, we see other elements of the stage change dramatically; the family home spins to reveal the rooms inside, huge trees engulf the sisters in the forest and quiet conversations take place in an intimate hospital room.

My Neighbour Totoro at Barbican brings the original film to life perfectly. This is one not to be missed by Studio Ghibli and theatre fans alike.

Tickets are available to purchase from http://totoroshow.com/.

Amy is a Curator and Creative Producer whose practice is centred around community-led arts projects. Her current research is focused on curatorial methods for exhibiting artworks outside. Amy has a keen interest in the arts and recently completed an MA in Curating and Collections at Chelsea College of Arts, UAL.