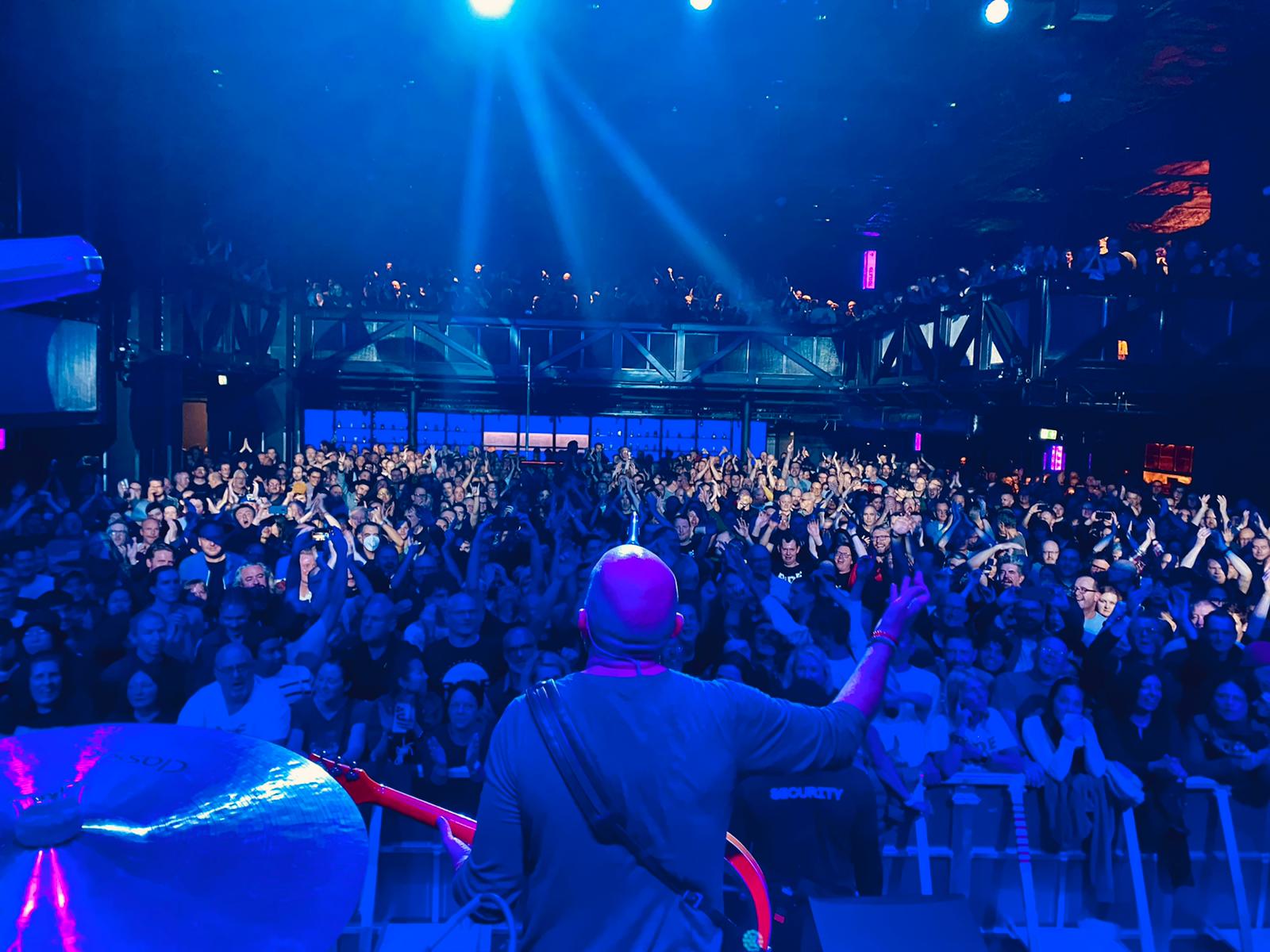 To celebrate the 30th anniversary of releasing their sophomore album Going Blank Again, Ride played almost the full album front to back at Here at Outernet, a new venue that opened this September less than 30 seconds’ walk from Tottenham Court Road station. The venue is underneath Denmark Street – a historic street colloquially known as ‘Tin Pan Alley’ – which first earned renown for being the home of many music publishers, and since then for its music shops. As a spritely 14-year-old, I visited London with my family and went through that street playing a new guitar in each shop for as long as I could before being politely ejected by the staff.

Eventually, I bought a gorgeous Washburn hollow body for about £300 of birthday money I’d saved from Wunjo Guitars on Denmark Street; I cherished it and for some reason covered it in stickers of metal guitarists. And for this reason, Denmark Street always conjures up fond memories and a feeling of safe paradise.

It’s fitting therefore that Here at Outernet is underneath Denmark Street, because as I descended the stairs leading to the auditorium, I felt like Dante entering Hell in his Divine Comedy. Presumably a wordplay on ‘here’ (i.e., ‘the artist is here’) and ‘hear’ (i.e., ‘you can hear the music live’), Here is an undeniably cool venue, cool in all the same ways as Boxpark – that is, in none at all. The whole place is decorated minimally in matte black, and as you watch the music, attendants skirt around you – like Pacman around the maze – to clean up the floors and purge the room of any of that vile, unwanted grit which gigs are so infamous for.

The above only applies if you’re able to watch the music, however. The venue is planned in the most ingenious way: despite being 2000 cap, its lines of vision are comparable to that of a festival main stage. It recreates the intimacy of the ‘big venue feel’ – oft missed in smaller ones – by making about half of its punters watch the performance from screens if they intend on actually seeing anything. Simulating a huge stadium in the middle of Soho must have taken architecture’s greatest minds to engineer, and it is in keeping with the Outernet complex’s really cool ‘internet but outside’ thing.

Most laudable by far however is Here’s energy efficiency. It may have been early November, but you wouldn’t have known that at the venue, which had all the comforting warmness of the Jubilee line at rush hour. During Ride’s set, I foolishly wanted to step outside for a minute to get some fresh air – but in the spirit of conserving energy in our current fuel crisis, the bouncer rightly informed me that there was no re-entry.

Now, for the band: with the scene now well pictured, imagine me trialling out various vistas throughout the show, imagining the pros and cons of each. Mark Gardener and co played an excellent set: it turns out there are excellent sound systems in Hell. Either that, or Ride have really good gear – also a strong possibility, given their roots in shoegaze. At any rate, the sound was huge, and that is most important.

One of Ride’s very pleasant surprises was their capability. Gardener still has the voice that has first made Ride so recognisable, and all four of them play with gusto, precision, and energy; the most impressive by far was Loz Colbert on drums (more on this later). None of the sloppiness of many other loud 90s bands. The reason this surprised me is that both on stage and off, the gig looked like a meetup of rejects for an upcoming Paul Weller biopic: I don’t think I’ve seen so many Harrington jackets in one room since I saw the King of the Mods himself at Plymouth Pavilions in 2015.

It makes sense that both band and crowd were in their smartest Freds and Clarks though. Going Blank Again was the point where Ride finally did what Nowhere threatened to do: they leapt faithfully into the melodic, Beatles/The Who/Stone Roses, lalala, ‘Sally Cinnamon’ sound that will never fail to put middle aged bums on seats. Mixing it with their thick, lush walls of sounds and washed-out vocals though, it injected life into a subculture otherwise known by outsiders exclusively for its tiredness.

On the subject of Going Blank Again, they did what any good anniversary set does: played (almost) the entire album. If you just play a few more songs from it than you ordinarily would, it risks feeling like a greatest hits set marred by some lesser tracks, or worse still, an opportunistic money grab. That the album start to finish worked excellently is testament to both Ride as performers and songwriters. After finishing with ‘Grasshopper’, they finished their set proper and did a seven-song encore of old hits and songs recorded since their 2015 reunion. They finished with ‘Chelsea Girl’, the first track from their first EP, and also my personal favourite Ride song. In the super loud, epic ending, I could feel Colbert smashing the pans so well.

My only real criticism of the band itself was the album/encore structure. Waiting a few minutes for them to come back out when they would obviously have to play some hits felt a bit forced. They could have just said, ‘That was the album, now let’s play some hits.’ A seven-song encore is also just a bit… weird. But if you actually got to the end of this self-indulgent review, I hope it’s evident that my bonfire night was one hell of a Ride (badoom-ch!).

All tickets are available from thebandride.com/tour