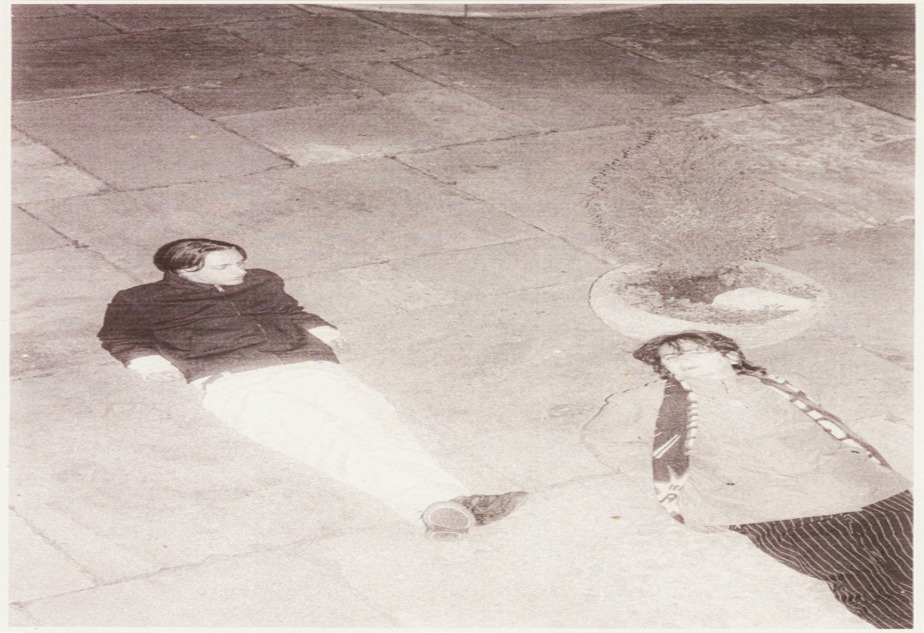 I was sceptical when I heard that Glows were holding a photographic and illustrative exhibition to coincide with the release of their debut mixtape, LA, 1620. I’m a bit old school in that I generally prefer old fashioned releases. Why do you feel the need for bells and whistles? It gives the impression that the music doesn’t stand up on its own. Our preconceptions are best challenged however: when they released their first EP, JL Hooker Love Pleasure Forever, in 2019, they curated three nights of music at the Royal Academy of Art.

The mixtape itself is fuzzy – it is an aural timelapse of a friendship between GG Skips and Felix BH that spans the most (and least) memorable moments of adolescence. ‘Pull’, which opens after the atmospheric ‘It’s All Love’, is a four-minute introduction to the sonic mission of Glows. In melody and emotion, it borrows heavily and appropriately from Midwest emo. The sounds are expressive and colourful, but always tinged with a sense of sadness and loss: think, ‘things will never be the same again.’ In this way, it recalls Burial’s 2007 LP Untrue.

The textures and rhythms employed by Glows are far more London than Ohio, however. The music is primarily sample-based, and the samples are flipped in such a way that their artificiality is celebrated rather than concealed. Skips reflected, ‘There was a period where I didn’t like the name anymore. We wanted to change it because it was a Midwest emo type name. But there was a real reason why I chose it, and it makes sense because it can be an artificial glow.’ Glowing lights at night – one of the key signs of urban civilisation – capture excellently the solitary atmosphere and garagey drumbeats that carry the listener through LA, 1620. 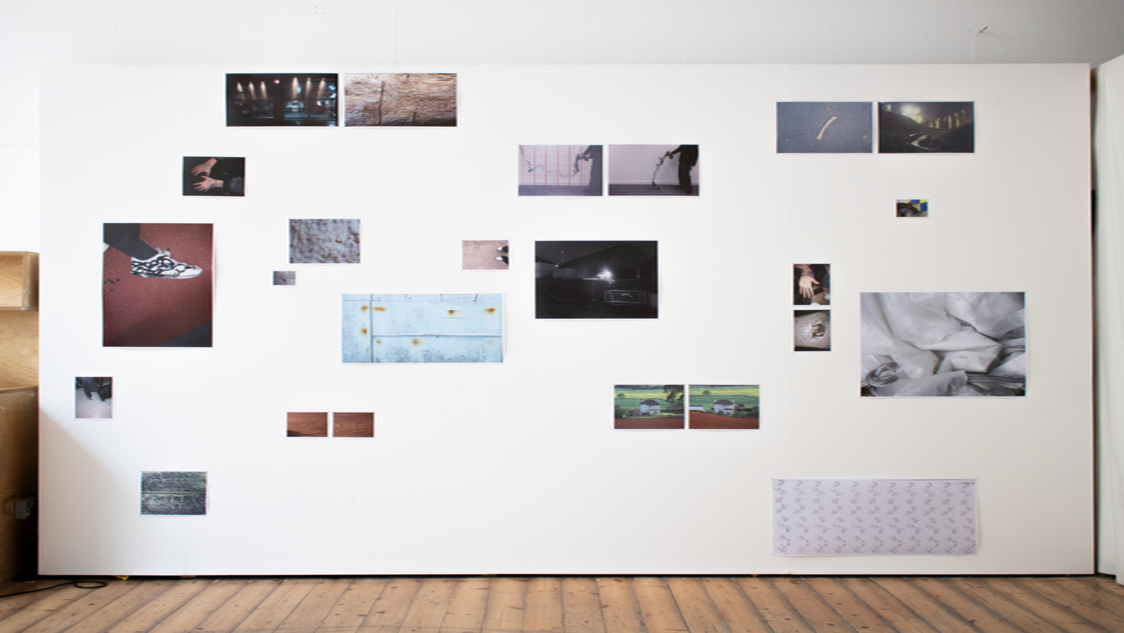 Journeys – whether through time, space, an album, or an exhibition – clearly sit heavy on the minds of Skips and BH. ‘Mappings’, ‘psychogeography’, and ‘syntax’ were three of the words they used that stuck out. Asking about the images, BH said, ‘Some of them are mathematical, like this one with the cows. If you were to throw a grid on that then you can read it like sheet music almost. Or you could extract a drum pattern or a melody out of it. If you can gauge visual data points, you can translate them using whatever metric you want.’ If pushed a little further, extracting patterns out of randomness seems unusual, but it is an interesting way of prompting creativity. BH prefers databases to timelines: ‘You’re leaving people to build linkages and connections between things themselves, rather than writing the narrative in.’ 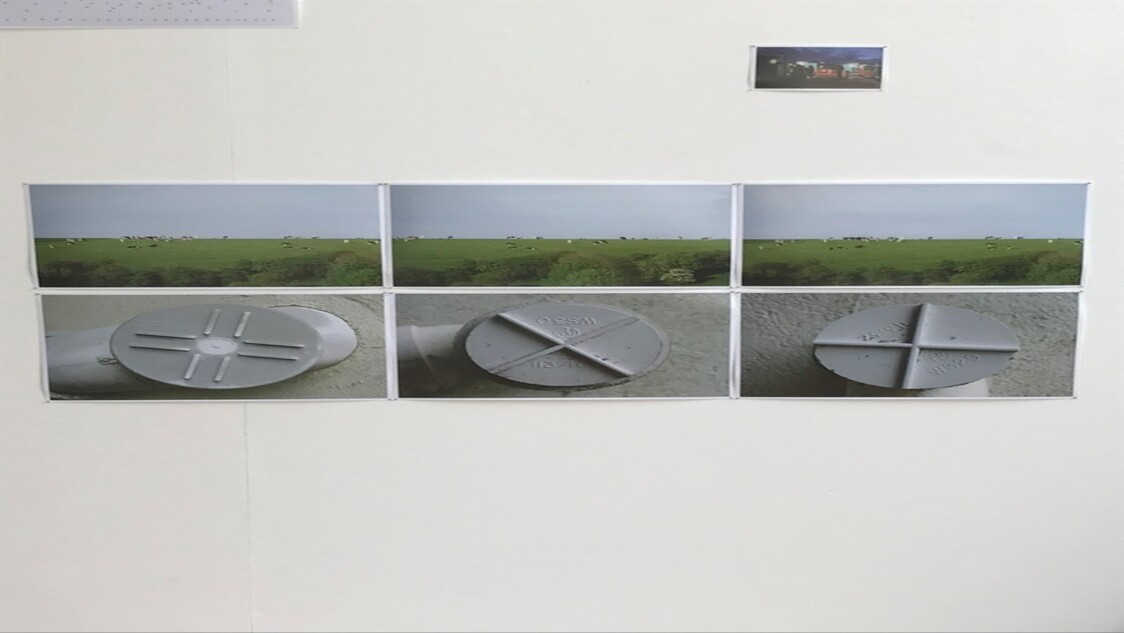 Keeping with the theme of loneliness and nostalgia, Glows is more of an ongoing dialogue than a concerted effort. When he makes the music, Skips uses fragments of voice notes and sounds inspired by the textures of the images. ‘If we’re wanting to get a particular bass sound, it would be like we want it to sound like that image’, BH says, pointing to a highly textured photograph.

The images, too, are often taken with the music in mind, so the project is a chain reaction. Simultaneously, they are the documentation of not just one friendship and creative partnership, but of coming of age. ‘He was around for all the times when I made the songs,’ Skips said, ‘all the events and locations that the songs talk about.’ 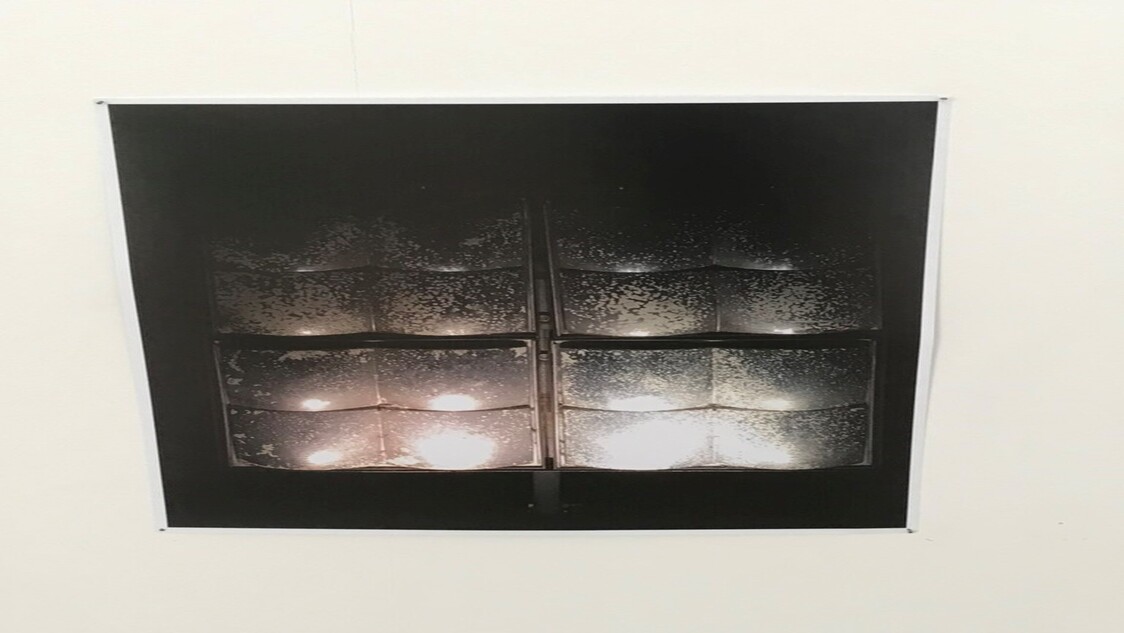 ‘Chaser’ and ‘Postpunk’, which follow ‘Pull’, vary enough from each other that they stand alone, but meld well enough that they flow well. The title of ‘Postpunk’ lightly pokes fun at the genre which has dominated alternative guitar music for the better part of the last decade; Glows also pay tribute to the genre by building the song from a heavily downtuned sample of a guitar or bass. (I can’t tell which it is.) The vocals ­– and this is perhaps the most Burial-esque aspect – are almost always distant and muffled throughout LA, 162o. Perhaps the main umbrage I take with the mixtape is that they sound quite like King Krule’s vocals.

The first major departure from the sound of ‘Pull’ is ‘Better (Westway)’, which sounds more hopeful and toys with the sonic similarities between brass instruments and the fuzzy 8-bit sounds produced by early Gameboys. Pure longing transposed into sound. As the central fifth song in a nine-song release, it feels like a threshold between the coherent, borderline poppy first half and the more textural second half. Its follower, ‘Wake Up To The World’, loops back to the theme of journeys, using emergency sirens and green man sounds in its background.

My least favourite track on the album is ‘Hideaway’, which veers a bit too far into the King Krule/lofi hip hop matrix for my personal tastes – 6 Feet Beneath The Moon was almost a decade ago now. Fortunately, the final 60 seconds or so builds up into a brief but potent frenzy of glitching, which redeems the track’s first five minutes. The first three minutes of ‘Italian Fountain’, which is five minutes long, are very ambient before it kicks into action for the final two. This property, and its sweet, echoey harmonica in the background reminded me of Mount Kimbie more than anything else. Although I risk sounding exceedingly metropolitan, finisher ‘Cigarette Burn’ fades out the album like a ride home on the night tube after a long party.

BH said, ‘We’re really interested in freezing – how you can freeze things in different media. Preserving the first take of something, or the original voice memo. There’s information in that, which is important to preserve.’ It seems to me, however, that their preoccupation with preserving what they have indicates the sadness about what they’ve lost.

Following this exhibition, Glows will be hosting open studio days in early 2023 where fans are invited to collaborate in merch creation, jam sessions, loop filmmaking and a ton of other creative stations. This will coincide with Glows’ double a-side release coming us this year! Dates to be announced soon!

A project 6 years in the making, mixtape LA, 1620 splices together and collages audio and visual artefacts from GG and Felix’s young adulthood, as they’ve grown from students to accomplished creatives. Photographic collage pieces were uploaded to a timeline site as a visual representation on the mixtape’s themes of self-sampling, looping and manipulating artefacts with a personal attachment to the duo.

LA, 1620 released on 15th September 2022 via Slow Dance: the label and creative collective that the duo founded in high school. Through their work with Slow Dance, Glows have played a pivotal role in London’s grassroots circuit in recent years, releasing annual compilation albums for independent artists, forming improvisational group EMU alongside Felix Raman, Black Midi and Martha Skye Murphy. Previously supported by Pitchfork, Quietus and NME, Slow Dance have been described by Dazed as “the collective at the cutting edge of London’s live music scene”.